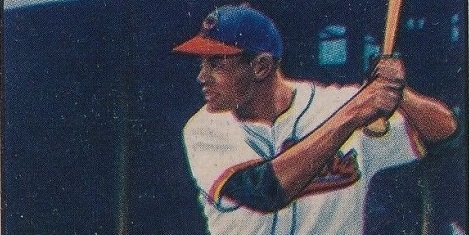 When I was a kid, we had a black-and-white television set.

It was one of those portable jobs that sat on an old nightstand or end table in the center of one wall of our living room. No remote, no antenna most of the time, save for a stretched-out wire hanger Dad or I pilfered from Mom’s stash.

This was no fancy home theater, but we gathered around every night, anyway, and soaked in all the mindless entertainment four channels could offer us. And it was magical.

Sure, it was magical in the sense that the family spent time together, though it was time in front of the tube, so …

But the magic that I’m thinking of is that I could see color on that fuzzy lined screen.

I can tell by your pursed lips and half-slit eyes that you don’t believe me, and you’re not alone in that. My dad and I argued endlessly.

But I’m telling you, I could see red lipstick on lipstick commercials, and Red-White-and-Blue flags, and the lush green of Walton’s Mountain, and the gritty sandstorm browns and tans of The Good, the Bad and the Ugly.

“You’re imagining it,” Dad would say. Maybe, but it all seemed pretty vivid to me. And even if Dad was right, does that mean that getting just part of the story can help with your imagination?

Hmmmm. Well, maybe. I’d like to think there was some advantage to growing up in the Stone Age, after all.

But this is Day 18 of my 2019 Spring Training Baseball Card Challenge. So what does all this TV stuff have to do with picking a card that I have always wanted but have never owned? 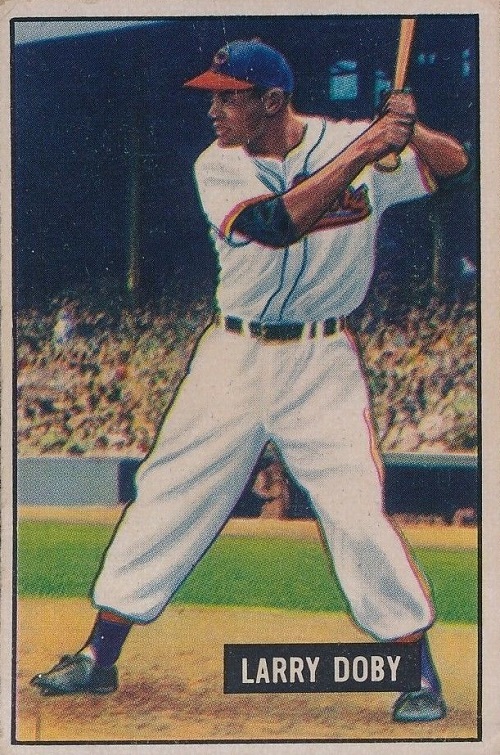 Not long after I started collecting for real in 1983, I was fortunate enough to come across Sports Collectors Digest, and then to get a subscription to SCD.

That magazine alternated its publication schedule, from biweekly to weekly then back to biweekly (I think), but all along the way SCD remained the place to go if you wanted the most-up-to-date information on the hobby — new releases, dealers, trade partners, articles about old cards, cartoons, player interviews — SCD had it all.

That is, by and large, SCD was a black-and-white pulp-paper rag (and still is, from the recent samples I’ve seen).

And, somewhere along the line in those hallowed pages, I discovered the brilliant 1951 Bowman Larry Doby baseball card. I don’t remember if it was in an article or in an ad, but I do know that it was rendered in black-and-white and that it melted my collector’s heart in an instant.

Doby is standing at the plate awaiting some poor pitcher’s next offering, bat held high, hands near his shoulders and out toward the dish, eyes locked on his mound victim. His strong legs provide a wide-stance base for that powerful swing you just know is coming. His white flannel Cleveland Indians home uniform billows slightly in the summer air, accented by a red, white, and blue cap, striping, and “Indians” emblazoned across his chest.

In the background, Cleveland Stadium looms cavernous and ominous, yet somehow inviting thanks to stands jammed to capacity with the local faithful. The only design element is a little black box near the bottom of the card that displays Doby’s name in white block letters.

The card back provides a simple narrative and font-color combinations that could have only come from the 1950s.

In my estimation at the time, this was just about he perfect card. And … well, I’ve seen the card in real life, in full-color glory, and my estimation hasn’t changed one whit.

Over the years, I’ve gotten more and more acquainted with this card, and its subject. 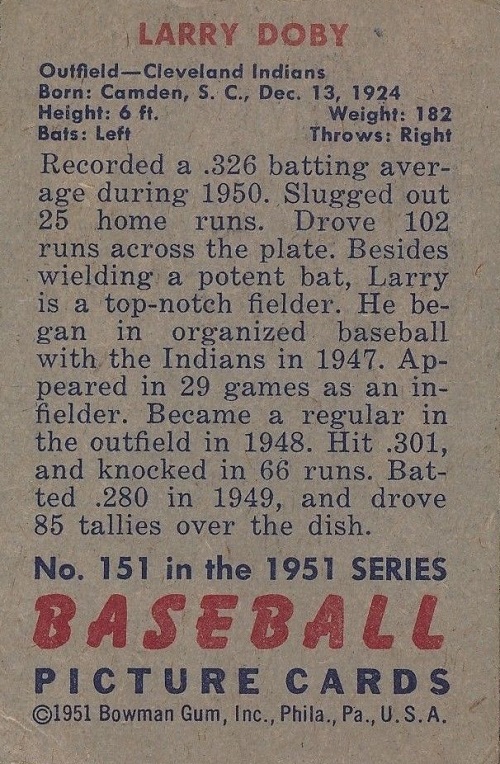 Doby himself, I’ve learned, was the first black player in the American League, following closely on the heels of Jackie Robinson. And, like Robinson, Doby weathered all of the indignities (and worse) hurled at him with grace and, well, dignity, while fashioning his own Hall of Fame career.

All of it makes me love that 1951 Bowman card even more, even if — maybe especially because — it appears to be modeled on an Indians team issue from 1950.

So why don’t I own one? After all, you can find VG copies for less than $20 on eBay these days.

I don’t have a good answer other than to say maybe I’m lazy about it. Or maybe … maybe I’m just afraid to mess with the perfection engendered by so many years of long-distance admiration. 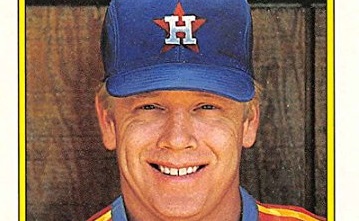