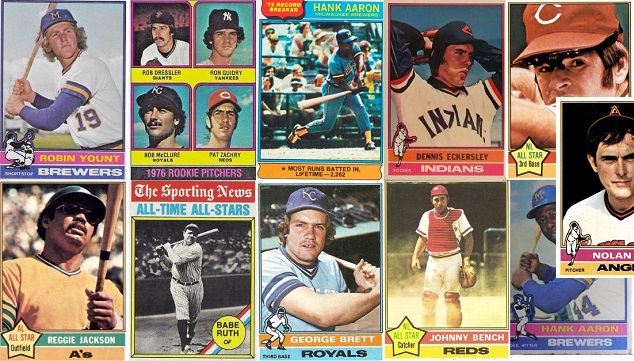 How do you follow up funky borders and a miniature parallel set? Well, with 1976 Topps baseball cards, of course!

And, while those Centennial year cards are understated by comparison to their flashy 1975 counterparts, this is an issue that grows on you over the years.

For a long time, the ’76s didn’t do much for me, but then I started studying the details — color-coordinated bands on card fronts, baseball-y card backs, position-specific figurines, kick-butt action photography.

Yeah, these things are pretty special. And some of them are worth a decent penny in the right condition.

That’s what this post is all about — the most valuable 1976 Topps baseball cards, as listed in the PSA Sports Market Report Price Guide for PSA 8 copies.

Watch out as you read, though, because these little beauties sneak up on you!

This second-year card was issued the same season Brett’s Kansas City Royals made it to the their first American League Championship Series, the same season the man himself won his first batting title.

All in all, this is a piece of hobby history, and one that will cost you plenty to own in PSA 8 condition.

So, it was cool, sort of, that Hank Aaron got to go “home” to Milwaukee to finish his career. After all, that’s where he started his Big League journey in 1954.

And this card looks weird for it, too, but it is Aaron’s last Topps card, so its hefty price tag seems about right.

1976 Topps Nolan Ryan isn’t really mad at you, not like Pasteboard Pete down below. But the Ryan Express sure looks disappointed.

What did you do to the flamethrower who dominates baseball card sets from here to 1968 and back, anyway?

Whatever it was, expect to pay dearly for Ryan’s PSA 8 disdain.

Once upon a time, Dennis Eckersley was a stud starter, like ace level.

Then personal problems and ineffectiveness left him swirling around for several years before he found himself with the Oakland A’s in the 1980s.

With Tony La Russa and Dave Duncan in his corner, Eck became a stud again … this time in the bullpen.

Add it all together, and you have a Hall of Fame career to go alongside his late-blooming rookie card.

1976 Topps Pete Rose isn’t quite sure what you said to him, but he’s pretty sure he doesn’t like it.

Sure enough that he’s flipped up his shades.

And if you say it again? He’ll come up out of that dugout and make you sorry you ever paid big bucks for his cardboard in PSA 8 condition.

Johnny Bench is, by most measures and most estimations, the greatest catcher of all time.

His 1976 Topps issue is undeniably one of the grittiest, most dramatic baseball cards ever.

What’s the combo worth?

When the Veterans Committee dropped a surprise Hall of Fame election in Ted Simmons’ Christmas stocking at the end of 2019, the hobby gasped … and then went scrambling to pull all of Simba’s cards from whatever oblivion they’d slipped into.

A few months later, as the pandemic-fueled cardboard explosion raged, all of Simmons’ cards surged.

The result here is a steep price tag for a caveman-coifed pasteboard that hardly ever saw the light of day even five years ago.

Reggie Jackson spent one oddball — but still great — season with the Baltimore Orioles in 1976.

For fans who found the whole specter of Reggie teamed up with Brooks Robinson too strange to even ponder, they could fall back on the familiar sight of Mr. October in his Oakland A’s green and gold here on his 1976 Topps card.

This hot dog with mustard sells for decent prices in NM-MT condition.

The Babe may have lost a couple of big records to Hammerin’ Hank, but he still scored this really sweet card in the 1976 Topps set.

Imagine how cool it would have been to pull this thing from a wax pack as the 1980s beckoned!

If you don’t believe me, check out this ’75 Record Breaker card.

By 1976, Schmidt already had two home run titles and two strikeout titles under his belt, and he was generally one of the most feared sluggers in all of baseball.

So it’s kind of funny that Topps chose a picture for his Bicentennial card that makes you do a double-take — is Schmitty bunting??

He’s probably just getting ready to drop his bat and circle the bases after ripping some horsehide.

But then … Schmidt, like, never bunted over the last ten years of his career, so very few fans would know what that spectacle actually looked like.

And also, the Phils’ legend bunted a career-high six times in 1976.

Rice looks contemplative on his 1976 Topps second-year card. Maybe even a bit melancholy.

That wouldn’t be so surprising considering that he had burst onto the scene in 1975 with a .309 batting average, 22 home runs, and 102 RBI to help the Red Sox to an American League East title, only to lose out on Rookie of the Year (and MVP) honors to teammate Fred Lynn.

And that’s to say nothing of the wrist injury that kept Jim Ed out of October play as Boston lost one of the most epic World Series ever (go Reds!).

Of course, Rice would develop into one of baseball’s fiercest sluggers, win the 1978 American League MVP award, and eventually land in Cooperstown.

No wonder his baseball cards remain hobby favorites, which goes double for this one, his first solo Topps issue.

Munson was a grizzled veteran of 29 when he led the 1976 New York Yankees to the World Series, putting together a fifth All-Star season that netted him the A.L. MVP award.

This card became synonymous with The Tugboat when Topps featured it in their 1982 Kmart set celebrating former MVP winners, issued three years after Munson’s untimely death in an airplane crash.

What were the qualifications to appear alongside Ron Guidry on his 1976 Topps rookie card?

Did you have to be a league MVP or Cy Young winner in the making, like Guidry himself?

Or did you have to have a Guidry-esque nickname like Louisiana Lightning or Gator?

Nah, you just had to have three letters in your first name — Rob Dressler, Bob McClure, and Pat Zachry fit the bill.

The four guys together will set you back mid-double digits in PSA 8 condition.

There you have them — the most valuable 1976 Topps baseball cards. Did your favorite make the cut? 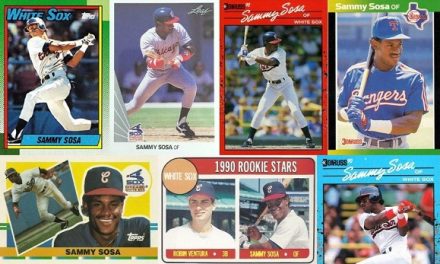 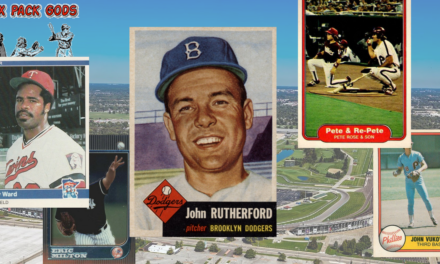