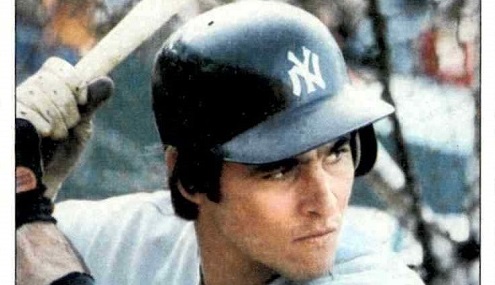 It may not seem like it now, what with 40 years worth of baseball memories sandwiched in between, but there is no better embodiment of the New York Yankees’ incredible run to the 1978 World Series title than the 1979 Topps Bucky Dent card.

I mean, Bucky doesn’t look too impressive standing in a cold batting cage with his long black sleeves protecting his slender arms. It’s sort of a dank image with only the cage netting as background, and the “SS” designation lets you know not to expect too much firepower from Dent’s bat.

Heck, Bucky doesn’t even get the benefit of the fabled Yankees pinstripes, saddled instead with drab road grays.

But, really, it’s all perfect.

At the end of play on Sunday, July 9, just at the beginning of the All-Star Break, the Boston Red Sox sat in first place in the old American League East, nine games up on the Milwaukee Brewers. The Yanks sat in third, 11.5 back. 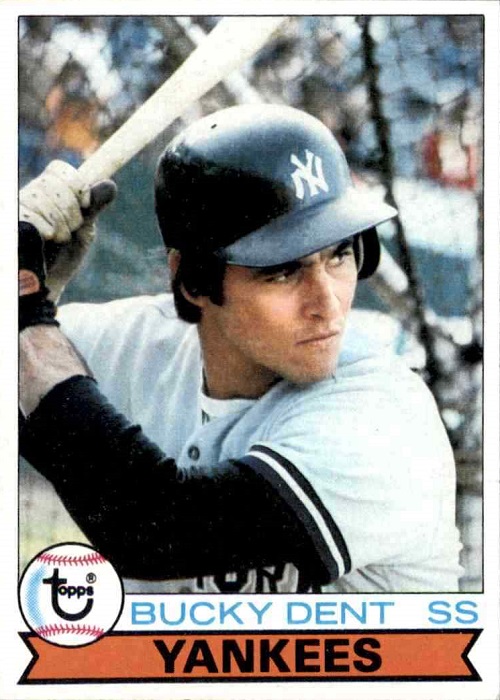 Though the BoSox lead softened a bit after the break, the Yanks’ situation actually got worse, as they slid to 14 games back by July 17, a deficit that remained unchanged through July 19.

The next day, though, Ron Guidry beat Darrell Jackson and the Minnesota Twins.

Then, a 6-4 run to end the month coincided with a 3-7 Boston slide to bring the Yanks to within 7.5 games of the lead. Trouble was, Milwaukee had climbed to within 5.5, and even the Baltimore Orioles got into the mix, matching New York’s 58-46 record.

Maybe even more challenging was the resignation of beleaguered manager Billy Martin on July 24. Dick Howser took the reins for one game before Bob Lemon took over for good.

So August began with mixed overtones for the Yankees, and the shine of their mini-charge wore off. An up-and-down month, though, left them 6.5 out with September to play. Even better, they held second place all to themselves, with only a limping Boston team sitting in front of them.

As it turned out, that stretch in late July was mere foreshadowing …

With blood in the water, the Yanks charged hard and took sole possession of first place on September 13 thanks to a 10-3 run coupled with a 3-10 BoSox splat.

It wasn’t over, though …

As has become so clear with these two teams over the many decades of their rivalry, neither one is likely to just lie down and clear a path to glory for the other.

So the Red Sox fought back.

After the Yanks built their lead to 3.5 on September 16, Boston chipped away and, after 162 games for both teams, their records were identical: 99-63.

And that set up a one-game playoff for AL East supremacy, to be played in Fenway Park on Monday, October 2.

When Graig Nettles began the Yankees’ half of the seventh by flying out, it was starting to look like the Boston season would be salvaged.

Then Torrez coaxed Jim Spencer into a flyout from the number-eight hole, and it looked like things might hold for the Sawx.

Especially with little Bucky Dent coming to the plate as the ninth hitter.

In his second season with New York after four summers with the Chicago White Sox, the diminutive (5-9, 170) shortstop appeared in 123 games during the regular schedule, batting at a .243 clip with five homers and 40 runs batted in. The chances he’d do much damage in this situation were slim.

The little righty (Dent) took the big righty (Torrez) deep to put the Yanks ahead 3-2. Mickey Rivers and Thurman Munson worked together, courtesy of a walk and a double, to bump that up to 4-2 before Lou Piniella flied out to end the inning.

Guidry and Rich Gossage held Boston scoreless in the bottom of the frame, and then Reggie Jackson homered in the eight to make it 5-2.

And, although the Red Sox roughed up Goose for a couple of runs in their half of the eighth and threatened — seriously — in the ninth, they couldn’t tie it up.

The collapse was complete, after a series of ups and downs, fits and starts, for the ages.

And, for a generation of Red Sox fans, Bucky Dent became Bucky “Fudgin'” Dent, only they didn’t say, “fudge.” 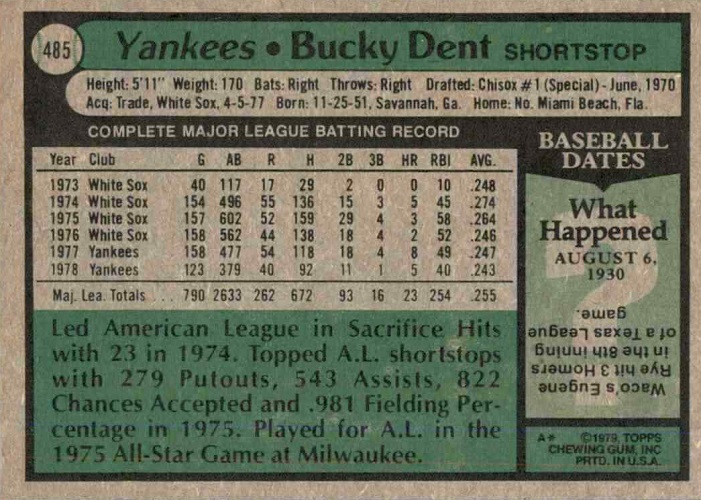 It wasn’t until the Sox finally won a World Series in 2004, and another in 2007 and then again in 2013 that the vitriol between them an their various goats (Bill Buckner) and mortal enemies (Dent) began to soften.

These days, the rivalry between the Yankees and Red Sox is as intense as ever, but the Sox have a new swagger that has helped them shed most of their hard-luck loser appeal.

In 2018, for example, Boston ran off a gaudy 108-54 regular-season record to set up a showdown in the American League Division Series with — who else? — the Yankees.

The Yanks went 100-62 themselves but were decided underdogs in the match-up with their bitter rivals, and the series played out about as the numbers said it might.

The teams split the first two games at Fenway park, but the Sox demoralized the Yanks in Game 3 at Yankee Stadium (III) by a score of 16-1. Game 4 felt mostly like a formality, and the Red Sox took a 4-1 lead into the bottom of the ninth.

New York clawed out a couple of runs in the frame, though, thanks to an Aaron Judge walk, a Didi Gregorius single, a Luke Voit walk, a Neil Walker hit-by-pitch, and a Gary Sanchez sacrifice fly.

But that left Boston closer Craig Kimbrel to face Gleyber Torres with two outs, runners on first and second. Any kind of ground ball would end the thing and, well, Torres grounded out to snuff out New York’s season.

It was a familiar tight ending between these two goliaths of the diamond, and you could almost have imagined it going the other way.

I mean, if you squinted and pretended you were young … couldn’t Gleyber Torres have been Bucky F’in Dent, just for that one at-bat?

Seemed that way to me.

But then, squinting and thinking about what might have been hurts a lot sometimes. Especially, in this case, if you’re a Yankees fan. 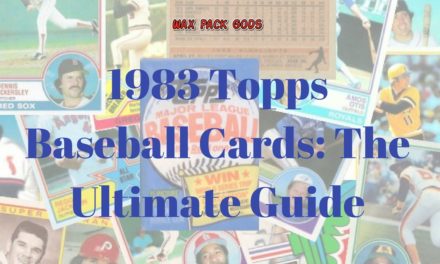 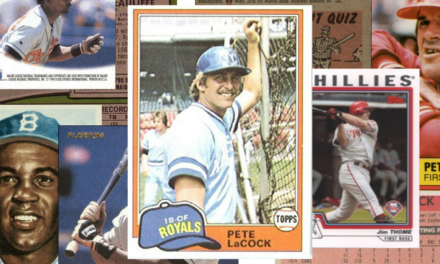