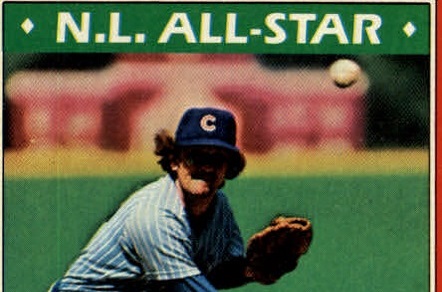 (This is the third in our series of posts about the best baseball cards from the 1980s. Check out the rest of those posts here.)

By almost any objective measure — and many subjective ones — the 1981 Topps baseball card set is the best of a flawed lot of base issues from that strike-shortened year.

Still, it wasn’t all (Butch) Wyne(gar) and (Pete) Roses for Topps.

Many of the photos were dark and dingy. Several were grainy.

The mushy brown cardstock came back for another year and felt cheap compared to Fleer (though not necessarily to Donruss).

Also, Topps was inconsistent in where they stuck young stars — Kirk Gibson got a solo rookie card, but Tim Raines got lumped in with Roberto Ramos and Bobby Pate as Expos Future Stars, and Fernando Valenzuela ended up as Dodgers Future Stars fodder. (Donruss managed to get Raines a single of his own, and Fleer featured “Fernand” Valenzuela all by himself.)

Still, 1981 Topps was a solid set with plenty of choices for “best” card. 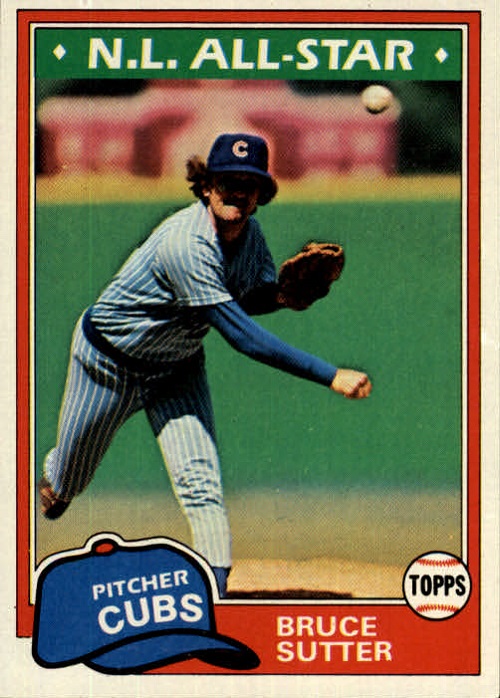 You could make a case for plenty of singles as the top of the heap, in fact. Here are a few that rank high on my list:

So which one actually is the best?

Well, that’s another question rife with subjectivity and moment-to-moment whims.

But right now, and given the cards I’ve already picked for various of these types of posts, I’m having trouble looking past the 1981 Topps Bruce Sutter card.

Now, critics can ding me right away because there is a ton of background in this image, and none of it is Wrigley Field.

But none of that matters.

In fact, it’s part of what makes the card great.

We get an almost full-body Sutter following through on a pitch that’s almost coming at us head-on but is skewed to our right just a bit. It’s like we’re standing in a very close-to-the-plate on-deck circle. Or like Bruce is putting some gusto into an intentional walk.

The ball is in the upper right-hand corner of the screen, just under the green N.L. All-Star banner.

It’s balanced — not quite symmetrically — with the TOPPS baseball in the lower right-hand corner, and Sutter straddles a Cubs hat as he finishes off his offering.

His long hair flies like wings from under his own cap and gives you the unsettling feeling that he might be a bit wild. A chilling thought when the baseball is coming in head-high.

Had this been any pitcher other than Sutter, it would have still been an effective card, but knowing that Sutter was perhaps the top reliever in the game when this shot was snapped makes it all the more impactful. 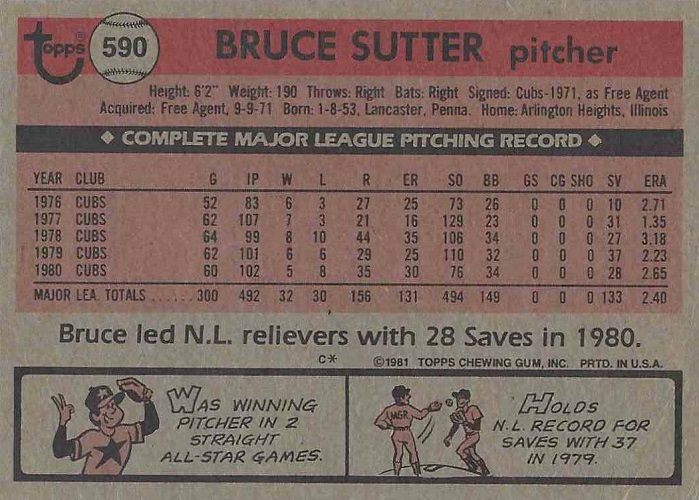 The card back helps reinforce this idea, too, especially the cartoons:

Sutter was so good during that 1979 season, in fact, that he won the NL Cy Young award, even though J.R. Richard and Phil Niekro might have had stronger cases.

And if all that isn’t enough to make this card a keeper in your mind, consider that it’s also the very last time Sutter appeared on a base Topps card in his Chicago Cubs uniform.

On December 9, 1980, the Cubs shipped Sutter to the St. Louis Cardinals for Leon Durham and Ken Reitz (the Cards would throw in Ty Waller on December 22).

Durham helped the Cubs to a division title in 1984, but Sutter kept chugging right along for St. Louis and was a key part of their pennant-winning team in 1982.

The Cardinals let him walk as a free agent after the ’84 season, and Sutter finished up with a three-year run with the Atlanta Braves.

All-told, Sutter crafted a relatively short (12 years) but dominant career during which he racked up an even 300 saves and helped bring the split-fingered fastball into mainstream use. For his efforts, he was elected to the Hall of Fame in 2006, just the second reliever — after Hoyt Wilhelm — to achieve that status.

And, if there were a Cooperstown for 1981 Topps baseball cards, Bruce Sutter’s last Cubs card would be right there with him.

(This is the third in our series of posts about the best baseball cards from the 1980s. Check out the rest of those posts here.) 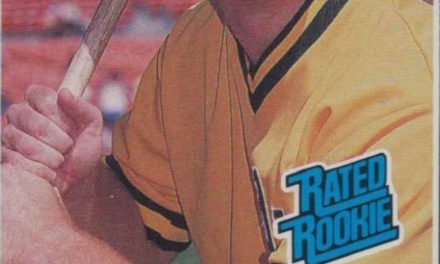 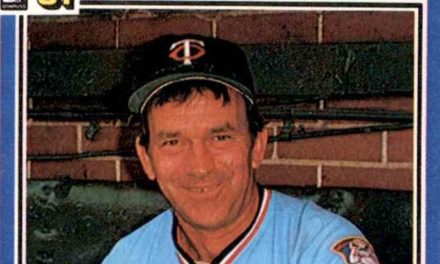