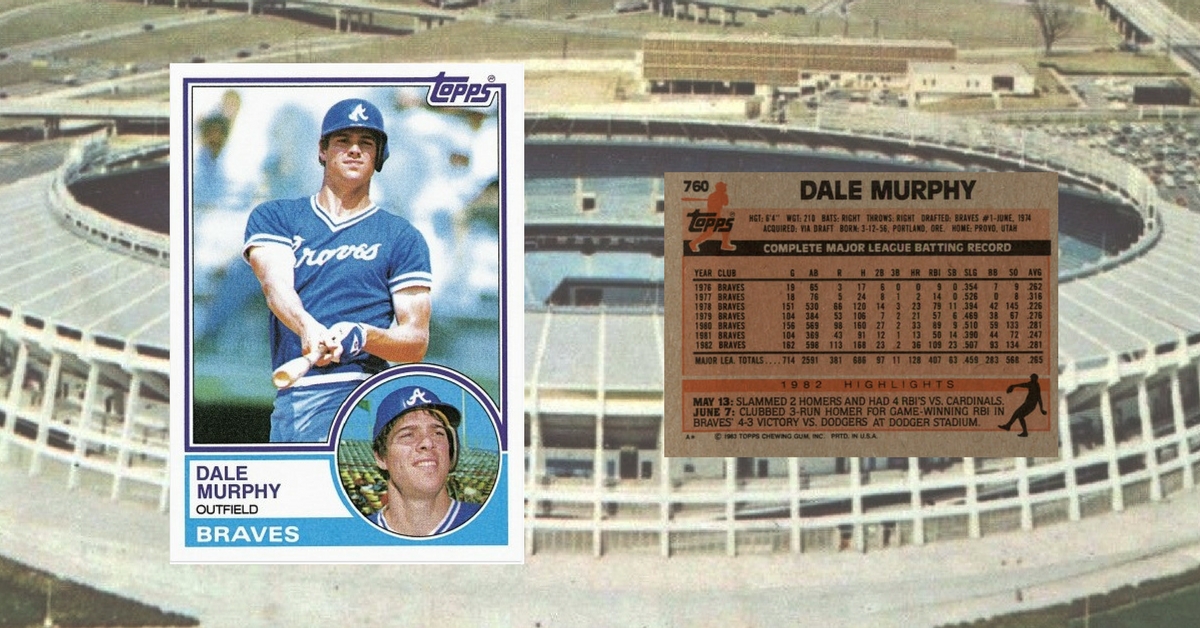 This is Day 16 of our response to Tony L.’s 30-Day Baseball Card Challenge, which means I’ll be talking about a player that I appreciate but don’t like.

(See all our posts in this series here.)

But for me, there is only one guy that can really fill this particular bill … Dale Murphy.

Now, I know that everybody likes Dale Murphy, and I probably would, too, at least from a personal perspective.

On the ball diamond, though, he’s one of my villains. And his 1983 Topps baseball card? Forget about it! 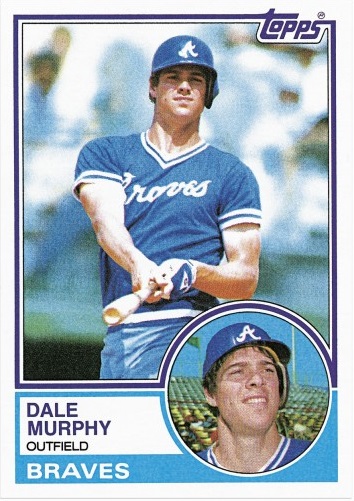 Despite that discrepancy, Mike’s OPS outdistanced Dale’s. .949 to .885. I’d also argue that Schmidt was better at third base than Murphy was in center field.

The real beef I have with Murphy winning the award is that it seems to be based on the fact his team won their division. The Phillies weren’t bad in ’82, either, though, finishing in second place at 89-73. I’m a “value” guy rather than a “team wins” guy, and Schmidt won the WAR battle in 1982, 7.4 to 6.1.

Schmidt could have easily nabbed his third consecutive MVP award.

Instead, Murphy won because his team won, because he had a lot of RBI, and because he was new and trendy.

Both of them jobbed Gary Carter and Andre Dawson in the MVP voting, though.

2) Murphy stole the 1983 National League MVP Award from Dickie Thon. Truth be told, Murphy and Thon were about as valuable as each other in 1983, but Murphy got the nod because he hit with power and his team won three more games than Thon’s Houston Astros.

3) Murphy’s 1983 Topps card is the very image of arrogance. There he is in the on-deck circle, twisted toward the camera with his bat extended as if to say, “See, this is how I inflict pain on pitchers across the land.” His short sleeves showcase slender but muscular arms and square shoulders that seem to taunt you. “Does your team have anyone like me?”.

And then, just to throw a little more shade your way, Murphy smiles off into the blue sky from his picture-in-picture head shot, teeth and dimple basking in the sunshine. “I’m just better than you all around.”

4) Murphy gave up the tools of ignorance for center field. Catchers are like you and me. They labor all summer long in the anonymity of their masks and pads, sweating and grunting to do the best job they can for their teams. There is very little glitz, and most of the glory that comes with the position is bestowed upon their battery mates on the mound.

Catchers get paunchy if they don’t start that way, their legs and backs get tired and old. They lose their hair.

Center fielders, though. Boy, those guys are something else, aren’t they? Center fielders are handsome and athletic. They’re the high school quarterback and the wunderkind middle manager from your office rolled into one package of intolerable self.

See what I mean?

5) Dale Murphy wasn’t as good as he was supposed to be. He was drafted in the first round of the 1974 amateur draft by the Braves and was going to be their catcher of the future. He wasn’t (see above).

And I wanted him to do it, too, because he was a good guy — I’d started to accept that fact. More importantly, he was part of my childhood landscape. So, yeah, go Dale Murphy!

6) Murphy was the National League version of Jim Rice. Not exactly, of course,  because Murphy was a better fielder and played longer than 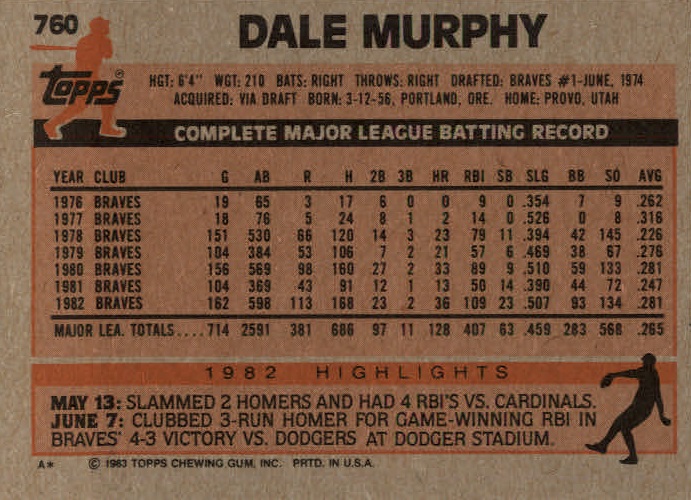 Rice. And Rice was a more fearsome hitter during his peak. But they both ended up with close to 400 homers, more than 2000 hits, and zero World Series rings.

Yet Rice made it into the Hall of Fame on his 15th and final ballot thanks to a groundswell of support that I can only assume originated from within the bowels of Fenway Park. Meanwhile, Murphy was never named on more than 23% of ballots before he fell off in 2013.

Would Murphy have made the cut had he retired with the Braves rather than hanging on with the Phillies and Rockies?

I don’t know, but I’m honked off that he disrupted the Murphy-Rice balance.

7) Murphy’s Braves always beat my Cincinnati Reds. The Reds went 4-14 against the Braves in 1982 and 6-12 in 1983. Never mind the Reds didn’t fare much better against any team during those years — I hated the Braves.

8) Murphy’s 1983 Topps card reminds me of both lost seasons. Look at the front, and you’re treated to His Superior Smugness (see above) that I could see each time the Braves were on the Game of the Week — which seemed like every week. Flip it over, and I could see the inferior stats that somehow robbed Mike Schmidt of the 1982 NL MVP award (see above).

9) Dale Murphy lost a home run contest to Gary Redus at Riverfront Stadium (see below). That was great for me as a Reds fan, but it hurts a little to watch it now. Redus was awesome, and I thought he’d be a major cog when the Reds started winning in the 1980s and throughout the 1990s. He had some solid seasons, to be sure, but he fell short of the Hall of Fame projection I had for him. So did Murphy, but, you know, see above.

10) Dale Murphy seems like a genuinely good human being. This one gripes me most of all because I can’t truly justify any of my other objections to Murphy. By all accounts, Murphy is a devoted family man, committed to his faith and pouring himself into all sorts of charitable endeavors. 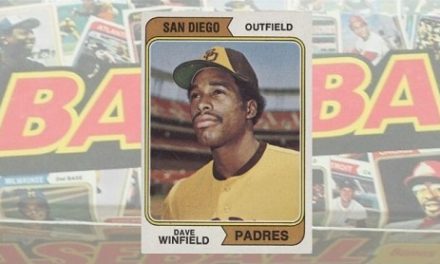