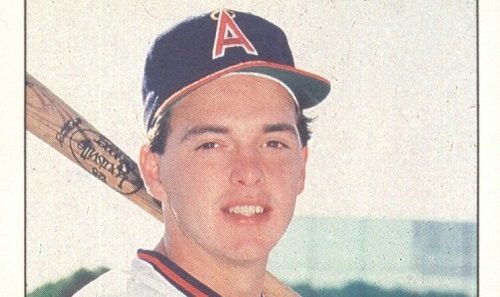 (This is Day 10 in our 2019 Spring Training Baseball Card Challenge., wherein I present the first card of a player.)

Heading into 1986, there were two things that baseball card collectors knew for sure …

Rookie cards would set us free … AND …

The evidence was all around us after three years of monster rookie campaigns and/or rookie cards got us frothing at the mouth. Consider …

Things were great and they were only going to get better.

And then … they did get better.

But a funny thing happened while we were all waiting for Canseco to live up to his initials.

Out there in the old American League West, Canseco’s own division, the California Angels bobbled around .500 for awhile, then ended April on an 8-3 run that left them in first place by two games. They were bolstered by a fairly potent if aging offensive attack that included Reggie Jackson, Brian Downing, Doug Decinces, and Ruppert Jones.

But one power source no one foresaw (or, at least no one in my limited circles) was a young first baseman named Wally Joyner. 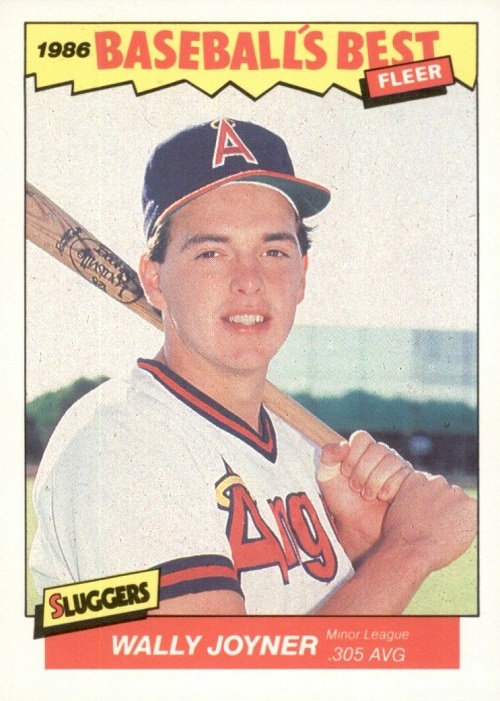 Just 23 entering the season, Joyner had spent three years working his way through the Angels’ minor league system after California drafted him in the third round in 1983. He had shown just brushes of power with 12 homers in 1984 and 1985 being his high-water mark, and he had zero Big League appearances.

But as the Angels jockeyed for position heading into May, fans and collectors suddenly realized that Joyner had connected on six bombs in the season’s first month. Canseco had “just” five.

With May came warmer temperatures and, unbelievably, even more heat from Joyner, who joined Canseco in clubbing 10 more home runs.

At that point, all heck broke loose in the hobby because, while Jose appeared on cards in both the 1986 Donruss and 1986 Fleer sets, Joyner was nowhere to be found from a cardboard perspective.

And what’s worse, we knew we’d have to wait until the year-end sets to get our first look at Big League Pasteboard Wally Joyner. Oh, the humanity!

But just as Major League teams jostle for the best possible position in the standings, so too did the card companies slug it out for our hobby dollars. That was especially true of the still upstart Fleer and Donruss, so it wasn’t too shocking when one of them went to their idea well and pulled back a brand spanking new Wally Joyner card.

In that era of cheesy 44- and 33-card box sets that ran the gamut from Kmart to Woolworth to Billy Bob’s Fish ‘n’ Scoot, no company had to be without their own branded set, even if that company was Fleer itself.

So the Philadelphia gum maker fired up the printing presses and cranked out a set of “Baseball’s Best Sluggers vs. Pitchers.”

It was a limited edition.

And it included the first-ever widely available Major League card of Wally Joyner at number 19. It was not a work of art by any means, and it was only “limited” by the number of trees on earth at the time, but we loved it.

I can remember this card selling for a few bucks each before Joyner cooled waaaaaaayyyyyyy down, connecting on just six homers over the final four months of the season to finish with 22.

Meanwhile, Canseco managed 33 and won the Rookie of the Year award.

And, of course, we got Joyner and Jose and Kurt Stillwell and plenty of other rookies in our Topps Traded, Donruss Rookies, and Fleer Update sets that fall.

But for awhile there, at the beginning of summer in 1986, no one meant more to the hobby than Wally Joyner. And if you wanted his baseball card, Fleer — and only Fleer — had you covered.