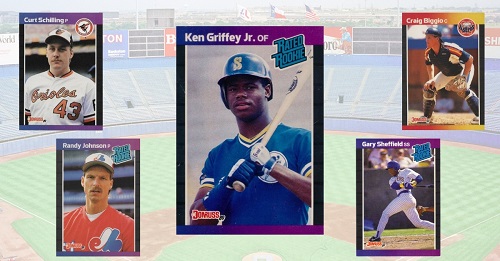 Are 1989 Donruss baseball cards your favorite baseball issue ever?

Well, if you said, “yes” — hmmm, you just might be alone in that opinion.

The good news in that case would be that you won’t have much trouble laying your hands on plenty of these beauties. Because, truth is, 1989 Donruss was produced in HUGE quantities that make them pretty easy to find even 30 years later.

But that doesn’t mean every 1989 Donruss baseball card is worthless. In fact, the 11 cards below can fetch decent prices on eBay, provided you’re aiming for PSA 9 or PSA 10 cards — that is, the cream of the crop.

Without further adieu, then, here is the rundown of the most valuable 1989 Donruss baseball cards … 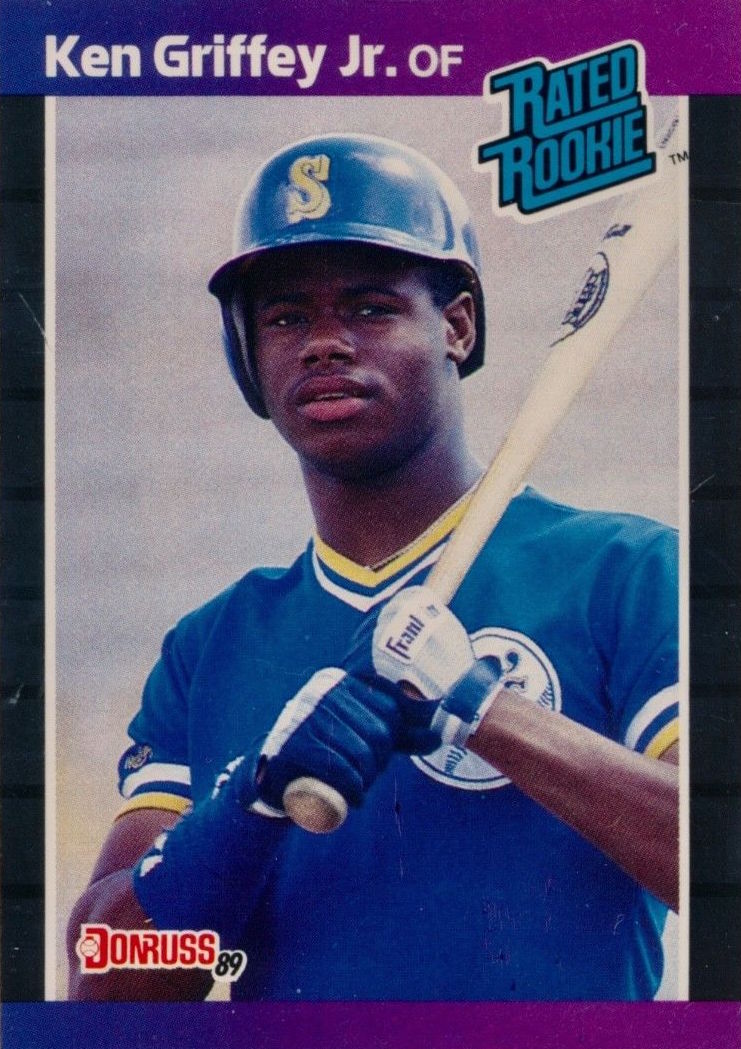 Any time you see the words “Ken Griffey”, “Jr.”, and “Rookie Card” in a card description, you can be sure it’s going to sit at the top of the value heap for whichever set it’s in. The 1989 Donruss Junior rookie is certainly no exception.

The only question surrounding Griffey when he retired was whether he would be the first-ever unanimous Hall of Famer. The fact that he didn’t quite clear that bar (even though Mariano Rivera did in 2019) doesn’t diminish Griffey’s hobby cachet one whit.

This card may not be Upper Deck #1, but it’s still an iconic hunk of Junk Wax cardboard. If you’re more of a Sabermetrics sort, Schilling checks in with an ERA+ of 127 and 79.6 WAR, which lands him 27th all-time among starting pitchers according to JAWS.

All of that has Schilling looking like an eventual Hall of Famer, having collected 60.9% of the vote in his seventh shot at Cooperstown in 2019.

And all of that makes this 1989 Donruss rookie card a popular piece, despite grumbling about Schilling’s attitude, his post-career shenanigans, and the flood of ’89s that still wash over the hobby. Once upon a time, Randy Johnson was a mystery — a raw talent who scraped the sky when he pitched. A firebrand who could scorch the air with his fastball but had trouble finding the strike zone on a consistent basis.

Things started to gel for The Big Unit, though, when the Montreal Expos sent him along with Gene Harris and Brian Holman to the Seattle Mariners in 1989 in exchange for Mike Campbell and Mark Langston.

Certainly among the top handful of lefthanders ever, Johnson was a cinch for Hall of Fame election when his name came up in 2015, and his 1989 Donruss rookie card was a cinch to appear near the top of this list. 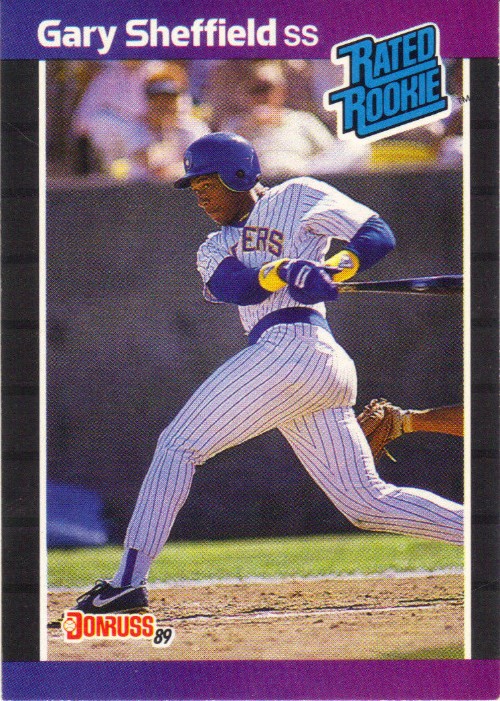 Once upon a time, Gary Sheffield was the most talented young player in the game, with a pedigree as Dwight Gooden‘s nephew that virtually guaranteed success in the Major Leagues.

Then came his season(s) of discontent, when Sheffield was unhappy with the Milwaukee Brewers. And Gooden started to slide, performance-wise, too — suddenly, Sheffield wasn’t so can’t-miss.

But a funny thing happened on the way to the scrapheap …

First, Sheffield was traded to the San Diego Padres, along with Geoff Kellogg, in exchange for Ricky Bones, Matt Mieske, and Jose Valentin, in 1992.

Then, it was off to the expansion Florida Marlins in 1993, part of the deal that brought Trevor Hoffman to the Friars.

In San Diego, and then in Miami, Sheffield found the stroke he was supposed to have, and he became an MVP candidate.

Never one to be warm and fuzzy with teammates or locals, Sheffield sort of bounced around for the next decade+ after he helped the Marlins win a World Series in 1997 — Los Angeles Dodgers, Atlanta Braves, New York Yankees, Detroit Tigers, New York Mets.

He has found the Cooperstown voting a hard row to hoe, but Sheffield still holds enough hobby sway to make this list. 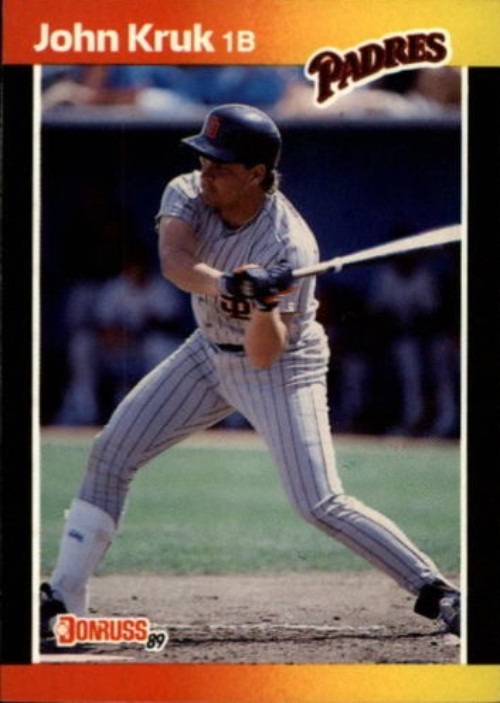 Indeed, for most of his 10-year Big League career, Kruk was a constant threat to hit .300, and he crafted his exit to make sure he landed exactly on that number.

Along the way, through stops with the Padres, Philadelphia Phillies, and Chicago White Sox, Kruk also showed some power finishing with 100 home runs among his 1170 hits. He was also a key member of that 1993 Phils crew that made it all the way to the World Series, only to be dispatched by Joe Carter‘s historic Game 6 homer.

Still a popular analyst, Kruk is also a college baseball coach who maintains a high enough profile to keep his cards on lists like this one. It may look a little funny to see Craig Biggio in the tools of excellence here on his 1989 Donruss rookie card, but he started his professional baseball life as a catcher before transitioning to second base and the outfield.

In fact, Biggio garnered Silver Slugger and All-Star honors behind the plate before making a position move in 1992. But anything the Houston Astros lost by swapping in Ed Taubensee for Biggio was made up in spades by adding years to Biggio’s Hall of Fame career.

And, of course, one of the most valuable cards in the 1989 Donruss set. 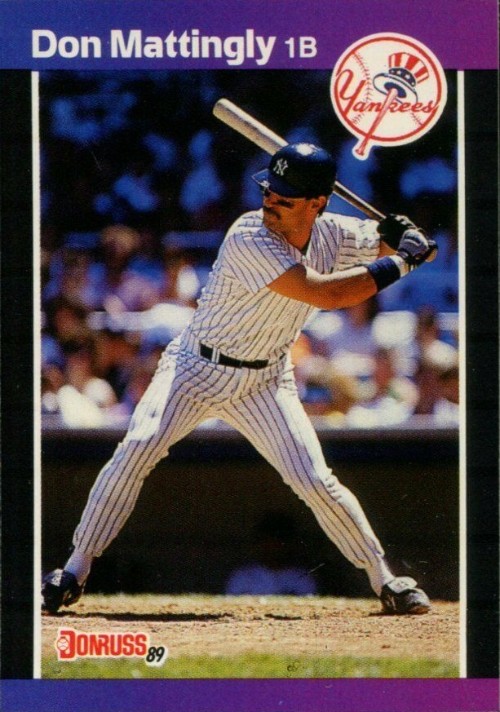 It’s true that Don Mattingly’s best baseball days (as a player) were behind him by 1989, but he did manage to play a full season that summer and rebound in his offensive performance a bit from what was considered a down year in 1988.

It’s also true that Mattingly was the face of the hobby in the 1980s, and the boom could not have happened, at least to the extent it did, without his emergence in 1984 — and the fact that you could pull his Topps, Fleer, and Donruss cards from fresh packs even as he battled with Yankees teammate Dave Winfield for the American League batting crown.

Mattingly falls short of Hall of Fame standards by most reckonings, but his baseball cards still feel special even 30 years on. This one is no exception. If Nolan Ryan appears in a baseball card set, that Ryan card has a 99.9999999999% chance* of being one of the most valuable cards in the set.  (*possibly a slight exaggeration)

This particular card has the added bonus of being the last regular Donruss issue to show him as a member of the Astros. It’s a great action shot, too.

What’s not to love? And collectors still do. 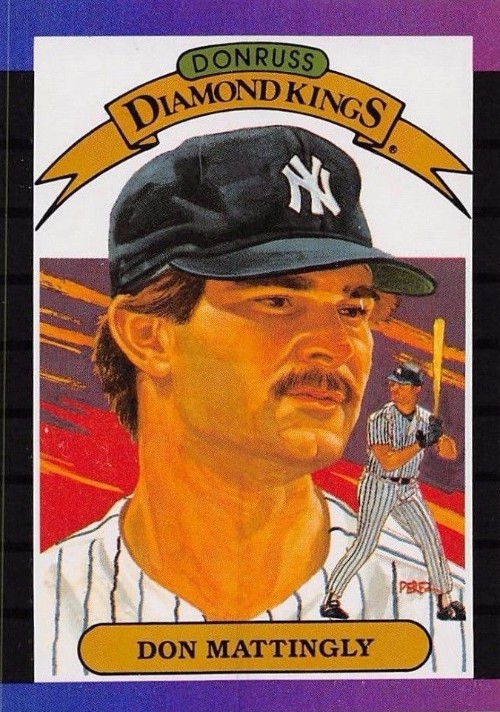 Everything that goes for the base Mattingly card above goes for his Diamond King, too. This was Mattingly’s second DK (1985 was the other), and it’s another Dick Perez masterpiece.

We couldn’t get enough of Mattingly in the 80s, though, so no one was complaining about an extra Donnie Baseball card, and this one still brings interest on eBay and in other venues. 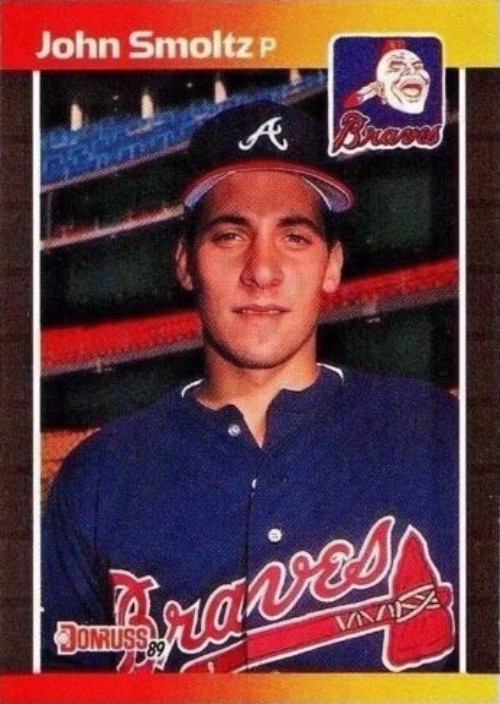 John Smoltz took an unusual route to Cooperstown, but that doesn’t really matter — he still got there.

One of the original members of the Atlanta Braves‘ vaunted rotation of the 1990s, Smoltz didn’t find the full-blown success of teammates like Tom Glavine, Steve Avery, or Greg Maddux right away, but he finally nabbed his own Cy Young Award in 1996, at age 29.

By 2000, though, the flamethrower had blown out his elbow and required Tommy John surgery, then came back in 2001 — as a reliever.

After three+ seasons as a lock-down closer Smoltz returned to the Braves rotation before finishing out his career with the Boston Red Sox and St. Louis Cardinals, one season each. 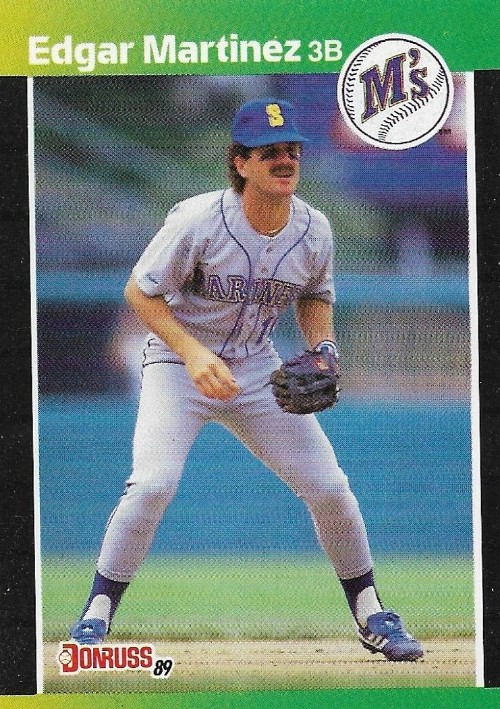 After much hand-wringing, hemming and hawing, and staring at his name on the ballot for 10 years, the BBWAA finally elected Edgar Martinez to the Hall of Fame in 2019.

Thirty years earlier, Martinez made his base Donruss debut with this card that shows him in the field. That’s significant because the knock on Edgar has always been that he was a designated hitter almost his entire career, diminishing his .312 average, 2247 hits, and 309 HR in at least some eyes.

Enough folks believe in Martinez’s greatness, though, to keep his base Donruss debut in the upper echelons of the set. 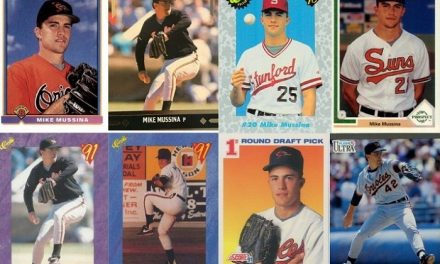