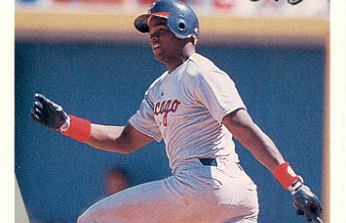 The 1990 Leaf baseball card set was born into a hobby at a crossroads … and helped us make the decision to turn hard toward uptown.

And, though we didn’t realize it at the time, a second-series card of a young guy named Frank Thomas would change hobby hot lists for years to come.

See, by the summer of 1990, Upper Deck had established itself as a new sort of card, a premium card, that came in Mylar packs and featured amazing photography front and back, thick and blazing-white card stock, and — for heaven’s sake — holograms!

Though we were skeptical of UD and its outrageous price point (99 cents!) in 1989, enough of us bought into the novelty early on to send those packs skyrocketing out of the gate — $2, $3, $5 before the year was out.

The next spring — 1990, that is — Upper Deck was back, and super popular, but Topps, Fleer, and Donruss (and Score, I guess) were also back, offering the same thing as always — OK quality cards that you could buy for pretty cheap, and that were available to just about everyone who wanted them.

But then, as the summer months rolled around, the news rumbled through the hobby — Donruss was going to take on Upper Deck, head-on, by producing its own premium brand.

In particular, they were dusting off the Leaf name that had been a vital part of a small hobby right after World War II, and which Donruss had used for the Canadian version of their base set in the 1980s.

The only question was … could the hobby support two premium sets?

As with Upper Deck the year before, many collectors were skeptical, and many decried the arrival of Leaf as (another) death knell for the whole shebang.

By and large, though, we were curious.

And there was plenty to pique our interest just in Series I alone, thanks to a rookie card class that included the likes of Eric Anthony, Marquis Grissom, Delino DeShields, John Olerud, and Ben McDonald, and Sammy Sosa.

Overall, the general reception for Leaf was solid, even if dollars weren’t flying out of wallets to load up on the stuff.

A pack or two here and there sufficed for most collectors.

But then, as Series II approached, we began to hear whispers that Donruss might have cut production for the next round.

Maybe sales of Series I weren’t what Big D had hoped for. Or maybe they thought interest would wane as the season wore on and NFL activities wore on.

Or, maybe, it was all just part of the hype machine.

By the time they finally arrived, we were fairly frenzied.

Indeed, whenever a dealer plopped down a box of Leaf cards on his table that summer, the whole room funneled that direction like a river through a sinkhole.

It helped that David Justice had a card — a rookie card — in the series, and that he was on his way to winning Rookie of the Year honors in the National League.

It helped, too, that the second run featured RCs of other standouts (and hopeful standouts) like Larry Walker, Carlos Baerga, Jose Offerman, and Kevin Maas — who just so happened to be lighting up American League pitching in the second half, and as a member of the New York Yankees.

All of that firepower helped boost Series II, and 1990 Leaf in general, right out of the gate.

But it was card #300 that set up the staying power that would keep the issue in the hobby limelight for years to come.

Barely a year after the Chicago White Sox made seventh overall pick in the 1989 Draft, Frank Thomas made his debut on the Southside in August.

It was an auspicious debut, too, featuring a .330 batting average, seven home runs, and 31 RBI in 240 plate appearances across 60 games.

That exhausted Thomas’ rookie eligibility while also leaving him too short on playing time to garner any ROY consideration, but none of that seemed to matter to the the 22-year-old.

The next year, Thomas served notice that he was no fluke, putting up his first monster season and establishing himself as The Big Hurt.

And, as Thomas marched toward a final line of .318/32/109 with a majors-leading 138 walks, any chance that the 1990 Leaf set would fall off the radar evaporated like Sosa’s Hall of Fame chances.

Thomas, though, marched straight toward Cooperstown, and that 1990 Leaf card blew the mercury out of the hobby thermometer.

Today, with big Frank firmly enshrined in the HOF and nothing changing in his all-timer’s profile — and with the knowledge that the cards aren’t really all that scarce — the hype has cooled around his Leaf rookie card.

And, without a doubt, the 1990 Leaf Frank Thomas rookie card helped us make an irreversible turn toward the upscale — for better or worse. 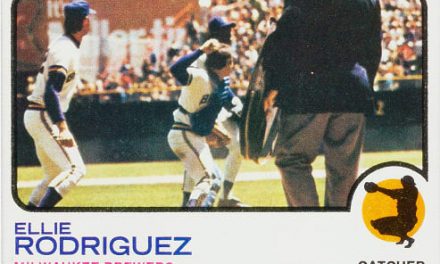 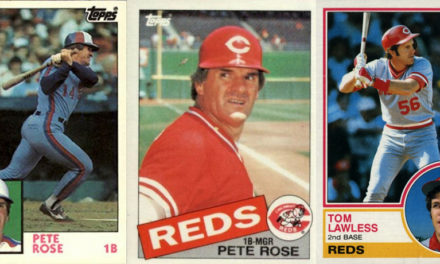 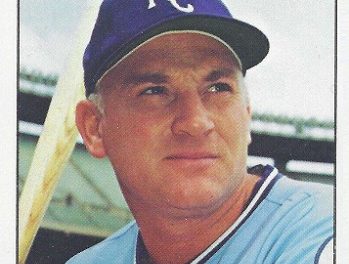