When the Detroit Tigers signed Al Kaline as a “bonus baby” in 1953, they knew they were getting something special.

After all, Kaline had been a standout on the diamond — and the basketball court — since his grade school days and forced his way onto the varsity team as a freshman in high school.

Scouts from several Major League teams were watching, but the Tigers’ Ed Katalinas beat them all to the punch and signed Kaline to a contract the day after the youngster graduated from high school in 1953.

Kaline went straight to the Majors, making his debut against the Philadelphia Athletics at Shibe Park on June 25, 1953.

He would collect seven hits in just 30 plate appearances that season, but returned in 1954 as Detroit’s starting right fielder at just 19 years of age.

Kaline was up to his old tricks, doing things before he was supposed to be able to do them, and making his teams look good in the process.

He hit .276 that summer and, despite just four home runs and nine stolen bases, he finished third in American League Rookie of the Year voting, behind Bob Grim and Jim Finigan. Kaline also picked up a few points in the MVP vote that fall.

If Kaline had stopped there, my first encounter with him might have still come to pass, but the shape of it would have been a lot different. 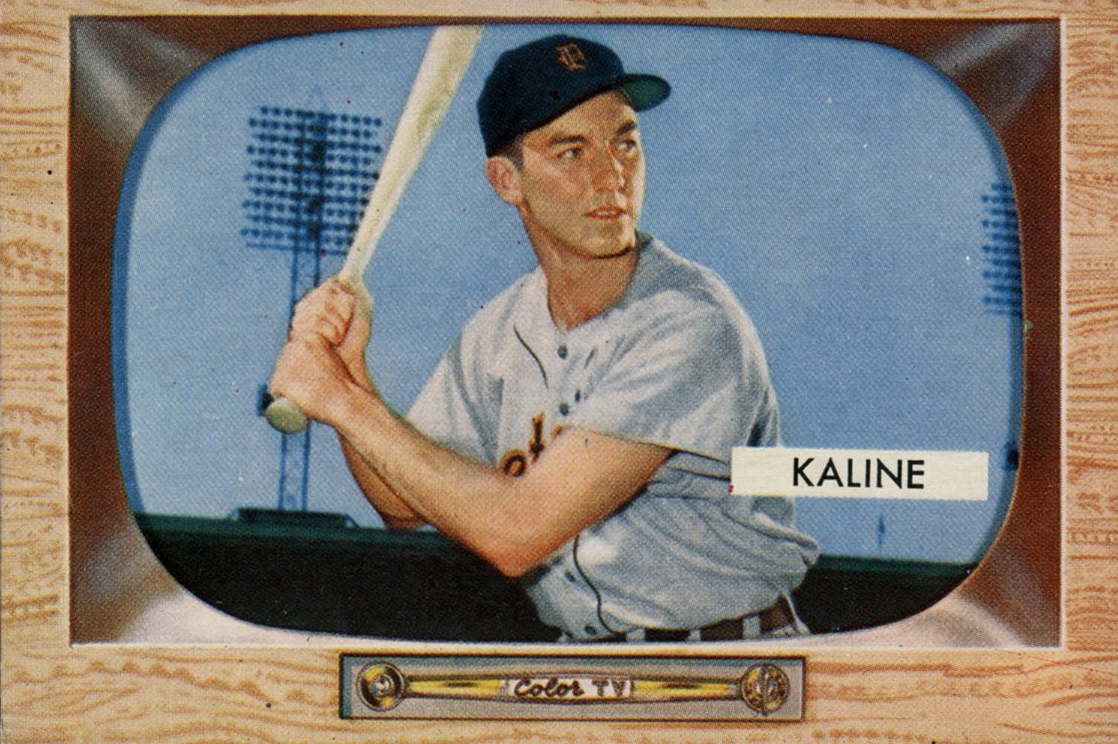 Less than 30 years after that promising but not overwhelming rookie season, I was walking through the wide aisles of an antique show with my parents. The array of glassware and furniture and pottery and ephemera on display was dazzling to all of us, but that was one of the reasons we had picked up this new hobby of ours — to be dazzled and to enjoy another piece of life’s beauty even if we couldn’t afford to own much of it.

This was a pretty fancy show, and we felt slightly out of place. There also weren’t many kids in the joint, and most of the dealers kept a close eye on me when we neared their booths — who knew what kind of trouble a preteen hooligan might bring, after all?

Breakage, theft, having fun … any an all of it seemed possible, I’m sure.

Despite the judgment, I enjoyed learning about the baubles on display, and I kept my usual vigilant eye out for any kind of sports memorabilia since I had recently begun collecting in earnest after a few years of resistance.

Not surprisingly, baseball cards were in short supply at an event that considered itself to be highbrow.

But, after a few hours (yes, hours!) of blinding crystal and monstrous furniture and paintings I had to turn away from because they were too racy — I mean, artsy — we entered a dark booth with war items and leather goods standing on the back shelves and a series of flat cases along the front tables.

Now, if you’ve ever been a collector on the hunt, you know what it’s like when your cardboard sensors zing to life. And, I can tell you, my ears lit up and my pulse started slamming before I even knew what hit me because there, under that low-lying glass, was scattered an array of ephemera that sparked hope.

I couldn’t be sure at first glance if there were any baseball cards, but things looked good. The telltale signs were in place …

A trail of postcards leading to …

A stack of ancient photos sitting atop …

An old Life magazine with some long-dead somebody on the cover, gazing over at …

A collection of matchbooks that came from all over the world, or at least from an earlier version of Indianapolis.

And there, next to the matches and in danger of catching fire (the horror!), was a modest row of baseball cards set on their short ends in a sewing machine drawer or a cigar box.

I elbowed my dad hard enough that he grunted, but he followed my finger to the bevy of beauties.

He smiled knowingly and nodded.

“Can we see your baseball cards,” he asked the fat, greasy man behind the counter (that always seemed to be who was selling cards, no matter where they were offered).

The guy looked us up and down with slitted, suspicious eyes, and I thought he was going to refuse Dad’s request, but he popped open the case and set the box on top.

“Those are some old ones.” 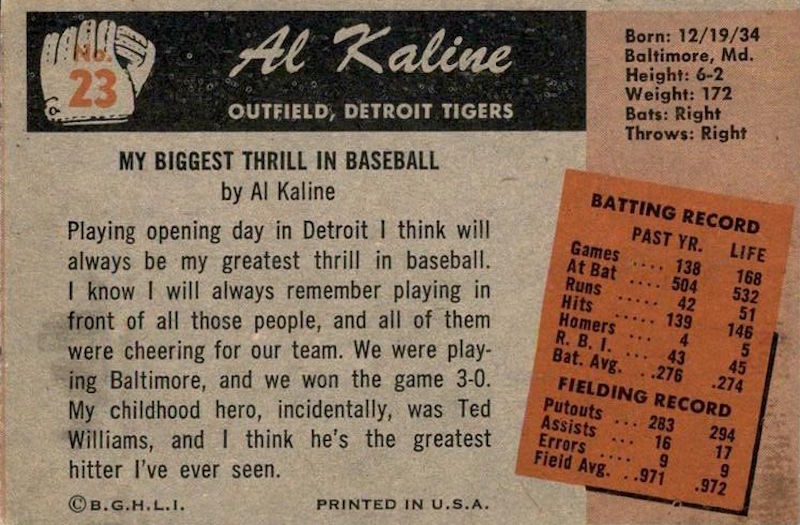 McGreasy took a bite of his greasy sandwich and watched me carefully as I picked up part of the stack with reverence and began to leaf through them.

All of them cost more than $1 each, though, and I knew that exorbitant price would be a tough sell if I couldn’t at least tell Dad something about the player pictured.

And then, somewhere in the middle of the stack, the world changed.

The lights pulsed brighter, and I was standing in Shibe Park — or Connie Mack Stadium — right there in front of a young Al Kaline, posing for his 1955 Bowman baseball card.

I had seen the 1955s in grainy black-and-white photos inside of pocket price guides before … and I didn’t like them. The TV set design was a gimmick.

The wooden borders were a gimmick and were prone to chipping (whatever that meant).

I mean, they were bad enough that Bowman sold out to Topps before the next season rolled around.

But standing there at Shibe under a blue sky with Al Kaline, and then pulling back just far enough to see the finished product of the moment, I knew I had to have that gorgeous card.

I didn’t know a lot about Al Kaline, but I had read some of his story in the baseball chapter books in my school library — the one about the 1968 World Series and the one about Denny McClain.

Al Kaline was decidedly not a common.

And the TV set design was just, like, beyond cool.

And the wooden borders were amazing, even if the right edge flaked up and looked like it might blow away every time I moved the card. Like to show it to Dad.

By this point, McGreasy was smirking because he could see I had my heart set on the Kaline card, and he could probably tell I was going to play my dad for all I was worth.

What followed was the usual ritual — haggling and threats of leaving without the card and my sweaty, clenched fists.

And, in the end, a nine-dollar Al Kaline card that still holds a place of honor in my collection.

Even if most of the wooden borders have long since flaked away.