10 Great Alan Trammell Baseball Cards Every Serious Collector Should Own 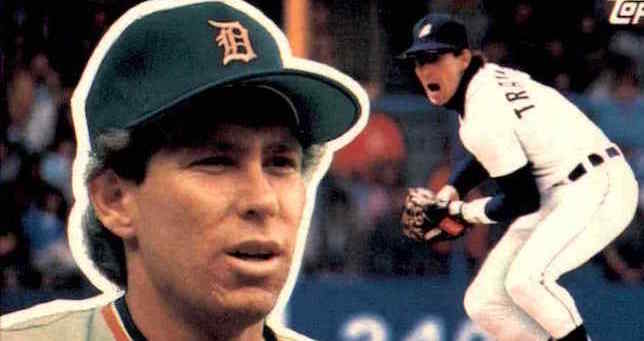 For years, Alan Trammell baseball cards told us what Cooperstown voters seemed to have trouble grasping — the man is a Hall of Famer.

In 2018, though, the Veteran’s Committee finally stepped in to set things right — the Detroit Tigers superstar shortstop got his bust at long last.

To celebrate, here is a rundown of ten great Trammell cards that even old-school collectors can appreciate, and that every serious vintage collector needs in his coffers. 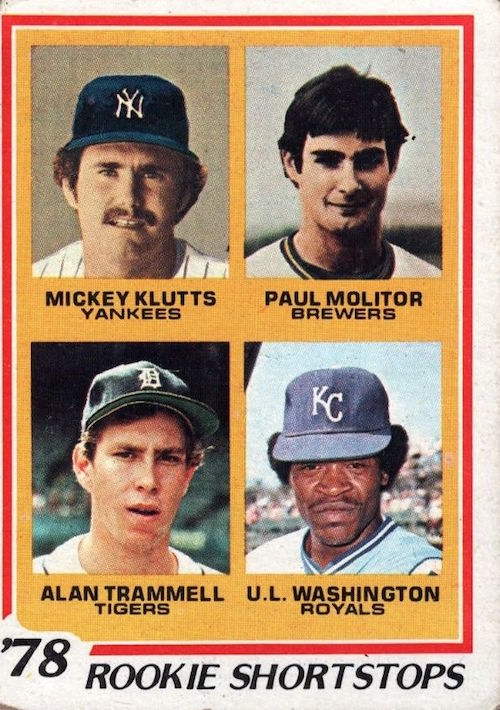 In the long history of Topps baseball cards, this is the only multi-player rookie card to feature multiple Hall of Famers — so far, at least.

But while Molitor has been waiting since his election in 2004 for Trammell to join him in Cooperstown, collectors have considered this HOF cardboard since at least the 1990s.

Not only does this card have an impeccable on-field pedigree already, but Molitor continues to build his resume as manager of the Minnesota Twins … and the card is subject to a hefty condition scarcity.

It’s a rare copy that isn’t cut off-center or “smudged” across the Rookie Shortstops designation, or both.

As a result, you can find these must-have cards ranging from just a few bucks for decent-but-smudged condition copies all the way up to several hundred for PSA 9s. 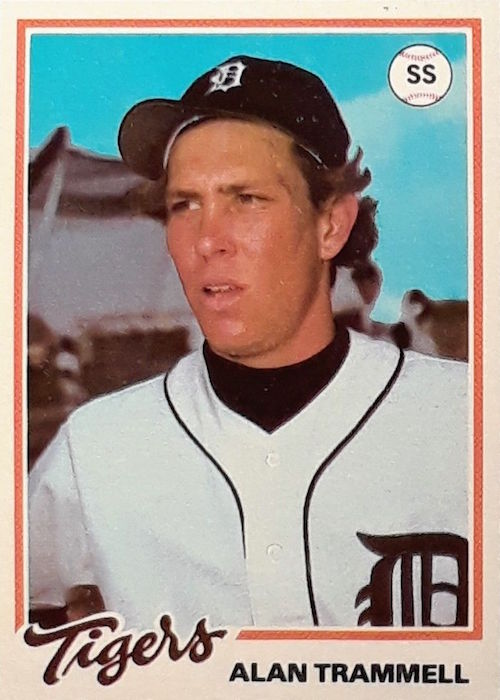 Collectors didn’t have to wait long at all to snag the first solo rookie card of Trammell, at least if they lived in the Detroit area in 1978.

That summer, Topps and Burger King teamed up to issue a set of Tigers cards that also included single rookies of Lou Whitaker and Jack Morris (but not Lance Parrish).

Issued in packs of three with food purchases, the cards were identical to base cards except for numbering and except for the rooks who escaped the bounds of their multi-player confines.

Today, the Trammell BK card sells for $15-50 raw depending on condition, on up to hundreds for graded MINT copies. 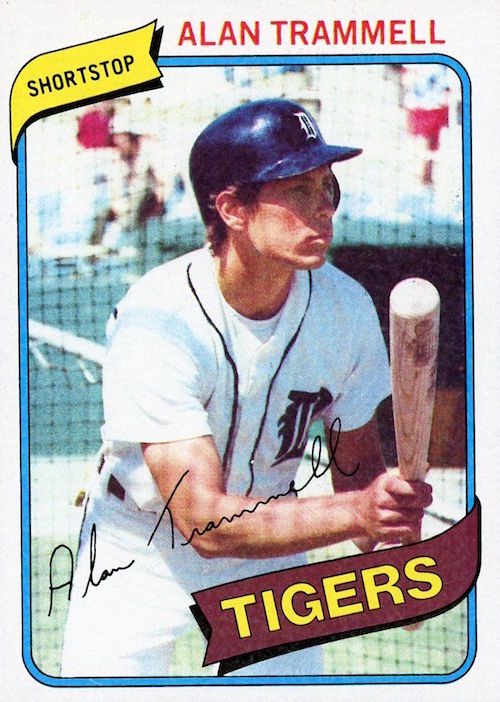 The first two cards on this list had to be there for historical and monetary reasons.

The 1980 Topps Trammell card, though, is here because it just looks great.

A young Trammell practices bunting in the batting cage on a sunny day with fans milling around in the stands behind him.

And it’s all captured in the framework of the underrated 1980 design, a simple but classic baseball theme.

With a selling price of just a couple dollars each, this third-year card is an affordable must-have. 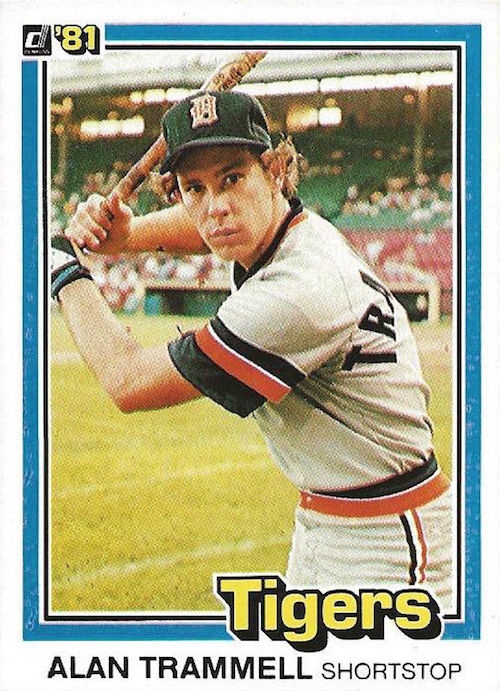 Back to historical significance for this one, as it is technically Trammell’s first Donruss card.

Of course, every 1981 Donruss card is someone’s “First Donruss Card,” but that doesn’t diminish the pairing on card #5 — future Hall of Famer and brash new card company.

The card is not bad-looking, either, showing a maybe nervous or scared young Trammell trying to put on a fierce face for the camera as he poses with a cocked bat.

The colors work well, and the wide expanse of grass and stands in the background give it all an old-school feel.

Not bad for a couple of bucks! 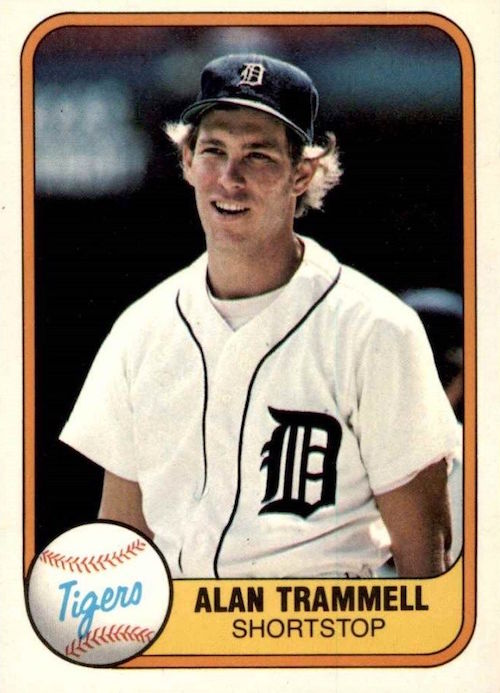 It’s mostly the same story here, except with even better history.

It was Fleer, after all, who spent years in court before finally breaking Topps monopoly with a $1 judgment that opened the door for new card producers to crash the cardboard party.

The design and card quality of 1981 Fleer are generally better than those of 1981 Donruss, too, and Trammell’s home white Tigers jersey looks pretty snazzy against the dark background.

Not the greatest shot in the world, but you really need 1981 Fleer Trammell in your Tigers 800-count box if you’re going to have any 1980s playground cred at all. 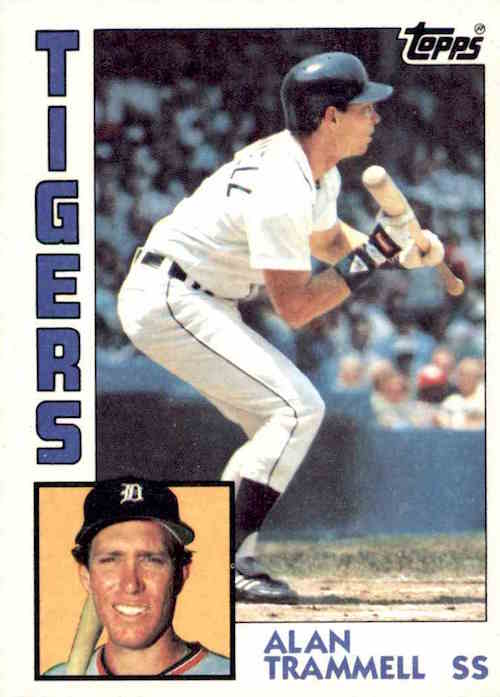 You can’t have a list of great Alan Trammell baseball cards without at least one piece of cardboard from 1984.

In case you forgot, that’s the year the Detroit Tigers stormed to a title on the back of an incredible 35-5  start and a 104-58 overall record. For his part, Trammell played his usual stellar defense and turned in a close-to career year (up to that point) at the plate before snagging the World Series Most Valuable Player award.

Of Trammell’s three base cards that summer, the 1984 Topps is, far and away, the best. You get Tram bunting in his Tigers whites in front of the hometown crowd with an orange-background headshot in the inset.

What could be better than that? 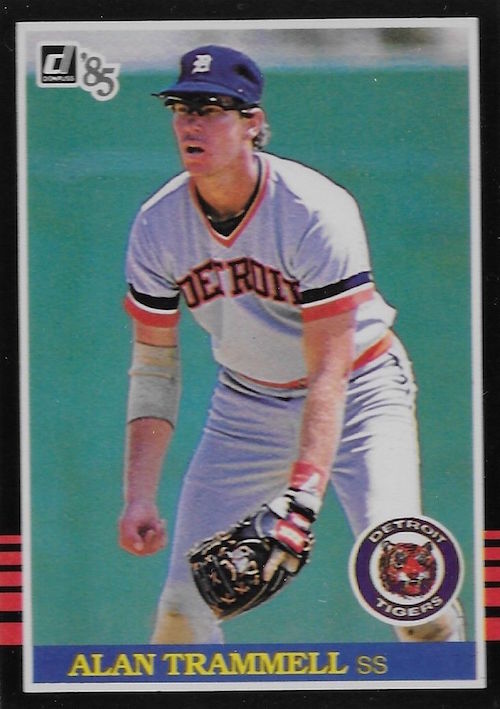 Trammell won four Gold Gloves during his career and probably could have won a few more.

So, you know, it would be pretty nice to include at least one fielding card among his top 10, don’t you think?

The 1985 Donruss set offered up a solid design with black borders that were very Donruss-y but not overpowering.

And Trammell’s card shows him at the ready, sunglasses flipped up, warrior wrap on his right (throwing arm), just waiting for a ball to be smashed his way.

We have a winner! 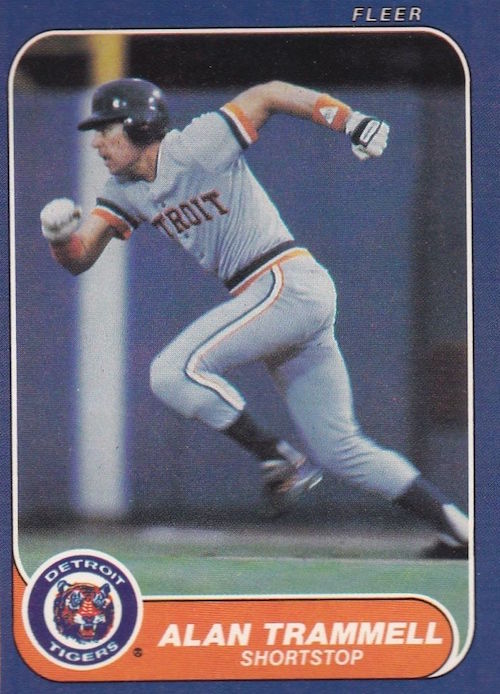 Another aspect of Trammell’s game that doesn’t get a lot of play all these years later is his speed.

Although the new Hall of Famer carried a much bigger stick than most of his shortstop brethren, he still maintained the type of solid baserunning you’d expect from the SS hole.

With 236 stolen bases and 109 times caught stealing, Trammell turned his speed into a net asset over the course of his career and stole as many as 30 in a season (1983).

There aren’t a ton of cards showing him in full-on sprint, but he looks like he has second base thievery on his mind on his 1986 Fleer card.

The photo is not the clearest, but it’s a solid mid-career issue overall. 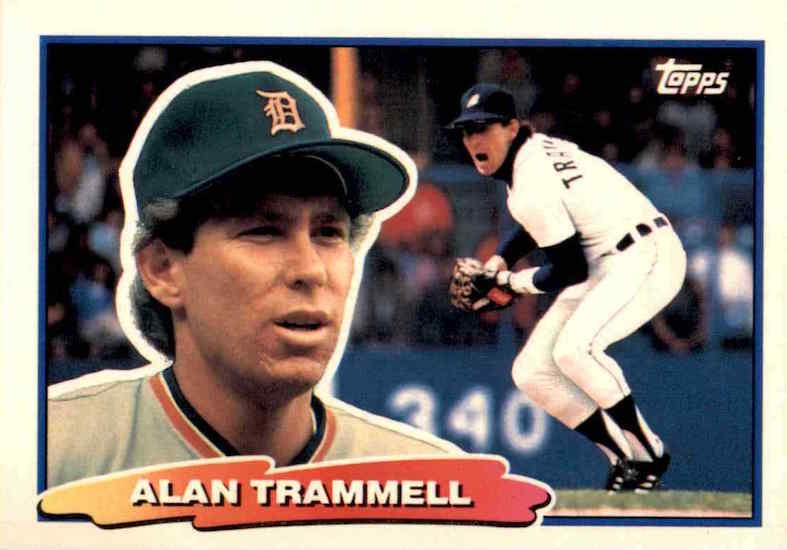 As far as collector appeal and sales went, the Topps Big cards were pretty much a bust.

The design was a bit funky for the time, and they were just too, well, big to fit in with other cards — in sheets or in boxes.

But they were pretty snazzy looking, and they gave you a 1950s feel that had been lacking since the Fifties (duh).

Trammell, with his hard-nosed play and classic Tigers duds, fit right into the retro theme.

His 1988 Topps Big card is a great mix of old and new (splashy name plate), and it looks pretty darn good overall if you can overlook its unwieldy size. 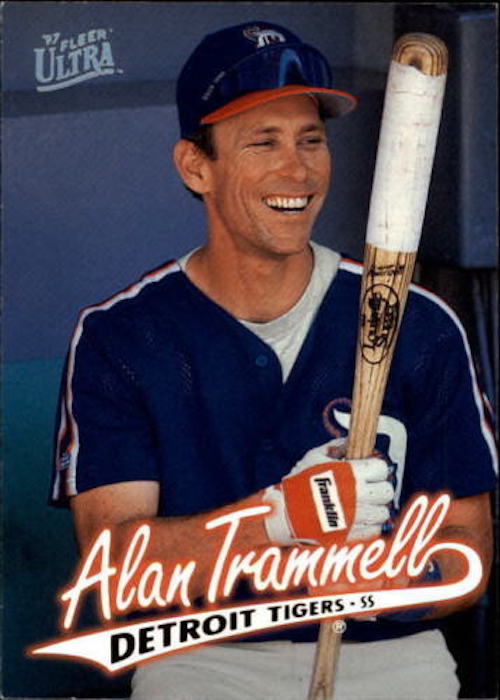 For all it does well, one thing Topps basically refuses to do is issue career-capper cards.

So, if you want to nab a card of your favorite player the year after he retires — and see all his stats — you need to look elsewhere.

Alan Trammell, who retired in 1996, appeared on a few cards in 1997, but the Fleer Ultra issue is as good as any and better than most.

Here you see a fully mature, fulfilled, and happy Trammell cutting up with his bat, maybe one last time.

You get a neon splash of 1990s glitz, and you get to see the Tigers uniform of the day.

And, on the back of the card, you get Trammell’s complete statistical story and another great photo.

It all adds up to one thing … Hall of Fame! 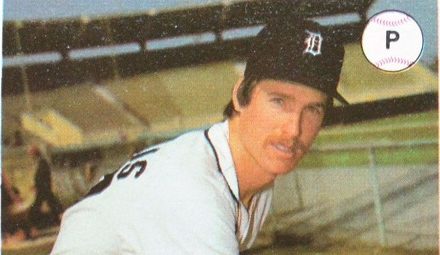 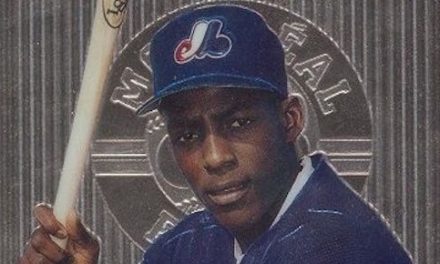 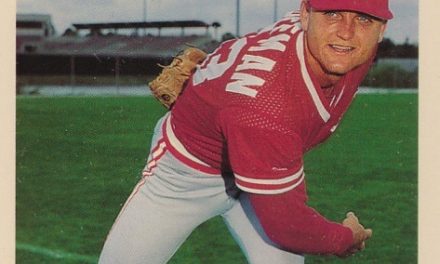 The Trevor Hoffman Rookie Card Is Not What You Think