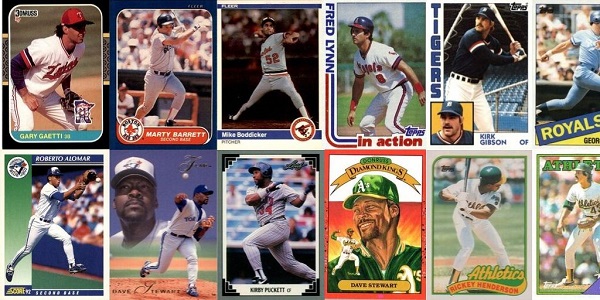 Though the ALCS MVP award didn’t debut until 1980, three years after its NL counterpart, there are still plenty of baseball cards to celebrate the winners.

Well … maybe not specifically to celebrate the winners, but there are plenty of cards of the winners from their award-grabbing seasons.

And that’s what we’re here for today, so …

Here is a rundown of the best baseball card for each winner of the ALCS MVP award from 1980 through 1993 (the year before The Strike), issued in the year they won, as determined by 2.

The Royals knocked on the World Series door all through the last half of the 1970s before finally breaking through in 1980.

They exorcised those postseason demons in emphatic fashion, too, sweeping their old nemesis — the New York Yankees — in three games.

On the offensive side of the ball, George Brett provided the firepower with two homers and four ribbies, but it was Frank White who took home the hardware on the strength of a .545 batting average, three RBI, and three runs scored.

Fittingly, White is digging in at the plate under an All-Star banner on his 1980 Topps card.

The Yankees righted their ALCS ship in 1981 by trouncing the Oakland A’s in three games.

Of course, that came after a little more tense five-game AL East Division Series against the Milwaukee Brewers, necessitated by the split-season debacle of that strike-torn summer.

The ALCS was never really in doubt, though, and neither was the MVP award, as Nettles batted an even .500 with one bomb and nine RBI.

And, when it comes to picking a 1981 Nettles card, it has to be Fleer … where else can you find the iconic “C. Nettles“?

In 1975, Lynn became the first guy to win the MVP and Rookie of the Year awards in the same season, and then he sort of quietly put together a string of excellent seasons for the Red Sox.

By 1982, though, he had the California Angels in the ALCS against the Harvey’s Wallbangers Milwaukee Brewers.

It was an epic series that ended in a one-run Brewers win in Game 5, but Lynn hit .611 and posted a 1.539 OPS to cop MVP honors in the losing effort.

On his 1982 Topps In Action card, Lynn is sun-dappled in showcasing another of his many skills — baserunning.

The White Sox made a lot of noise on their way to the 1983 AL West title, thanks to the power exploits of Rookie of the Year Ron Kittle and the mound excellence of Cy Young winner LaMarr Hoyt and fellow 20-win guy Richard Dotson.

The Orioles were a bit more quiet in their excellence, aside from Rookie of the Year-turned-MVP Cal Ripken Jr.

The youngster made just one start in the ALCS, but it was a Game 2 shutout that began a three-game run to the pennant and left Boddicker as MVP.

He didn’t even have any cards that summer, but Boddicker’s 1984 Fleer rookie card sits at #1 in the set, thanks to the Orioles’ eventual World Series championship.

Before Gibson hit the most famous one-legged home run in World Series history, he was a fireball for the Detroit Tigers.

In the ALCS sweep over the Royals, Gibson led all batters with a .417 batting average and hit a Game 2 bomb. Also drove in and scored two runs on his way to the trophy.

Gibby looks surprisingly calm as he bats in the cage in old Tiger Stadium on his 1984 Topps card.

For a 10-year stretch starting in 1976, it was a major upset when the Royals didn’t win a division title.

They were back for their last one in awhile in 1985, and Brett made sure his team made the most of the moment.

The series MVP is in full extension as he connects for yet another hit (probably) on his 1985 Topps card.

Who was the biggest superstar of the World Series-bound 1986 Boston Red Sox?

All monster contributors, and Hendu in particular was an ALCS hero for the way he dominated Donnie Moore in Game 5.

But it was second baseman Marty Barrett who landed MVP honors, on the strength of a .367 BA with five RBI, two doubles, and four runs scored.

Fittingly, Barrett is busting out of the batter’s box after smacking the ball against those same Angels on his 1986 Fleer card.

The Twins were no juggernaut heading into the 1987 ALCS, having won a weak AL West with an 85-77 record.

They broke out their bats against the mighty Tigers, though, and Gaetti contributed two dingers and five RBI. You could make a case that Tom Brunansky (2 HR, 9 RBI) was even more important, but Gaetti took home the trophy.

Part of the reason was undoubtedly his solid fielding at third base, which is reflected in his black-bordered 1987 Donruss card.

The 1988 Oakland A’s were the first of three Bash Brothers teams in a row to win the AL West, where they downed the defending world champion Twins by 13 games.

In the ALCS, Oakland predictably steamrolled Boston, who had squeaked out an AL East title by one game over the Tigers, with three other teams within four of the crown.

Jose Canseco smacked three bombs in the ALCS, but Eckersley took the MVP by saving all four games, allowing just one hit, a couple of walks, and no runs over six frames.

His 1988 Topps card is among the first base issues to show him with the A’s, and Eck is basking in the Oakland sun as he finishes off a pitch.

It took the A’s one extra game to finish off the Blue Jays in 1989, but they were still the game’s dominant team.

Maybe even more so than the year before, as prodigal son Rickey Henderson was back from the Yankees after a midseason trade for Greg Cadaret, Eric Plunk, and Luis Polonia.

In the ALCS, Rickey hit two bombs of his own, batted an even .400, and stole a whopping eight stolen bases without getting caught. Also drew seven walks to boost his OBP to .609.

Henderson’s 1989 Topps Traded card shows him crouched in the Oakland batter’s box, surrounded by an ocean of green and gold.

No matter how many 20-win seasons Dave Stewart strung together in a row (four), there always seemed to be someone who turned in a better season to claim the Cy Young award.

No one was better than Stewart in the 1990 ALCS, though, as he pitched two eight-inning, one-run masterpieces and held the Red Sox to eight hits and two walks over 16 innings.

It was fitting that collectors could still pull his gaudy but dramatic (and deserved) Diamond King card from packs as the A’s marched toward their third straight AL pennant.

By 1990, the shine had worn off the Twins’ 1987 championship to a large degree, and they slid all the way to last place in the AL West.

In 1991, though, bolstered by youngsters like Chuck Knoblauch and Scott Erickson, and newcomers like Jack Morris, the Twins reclaimed the division to face off against Toronto in the ALCS.

In that series, Puckett flexed his muscles to the tune of .429, two homers, six RBI over the five games to win MVP and set up one of the most dramatic World Series ever.

The Blue Jays had been trying to break through to the World Series since their first ALCS appearance in 1985, but they found the going tough.

They drew a tough assignment in 1992, too, in the form of a resurgent A’s team, but Toronto put up a potent offensive attack that ended Oakland’s season in six games.

Alomar sat at the top of a strong group of Jays hitters, batting .423 with two homers, four RBI , and five steals (no CS, either).

In general 1992 Score is not the strongest set of the decade, but Alomar looks like a Hall of Famer in the field popping out of card #15. This beauty could be a souped-up, modernized version of classic Topps issues from 1954 through 1956.

Turns out, even though Stewart left the A’s after the 1992 season, and even though his 20-win seasons were behind him, there was still glory to come for the ace.

A big hunk of that limelight came in this ALCS, where Stewart held the White Sox to three runs over 13 1/3 innings and won both of his starts.

That included the Game 6 clincher and garnered the MVP award for Smoke.

Stewart’s 1993 Flair card is sort of cheesy, but it’s dramatic and shows his new digs to great effect. 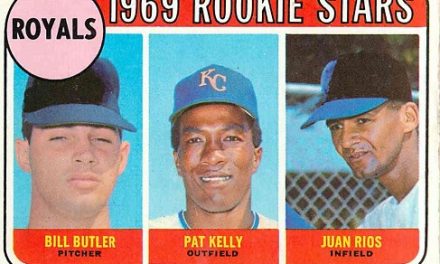 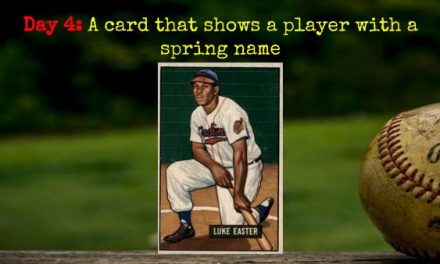 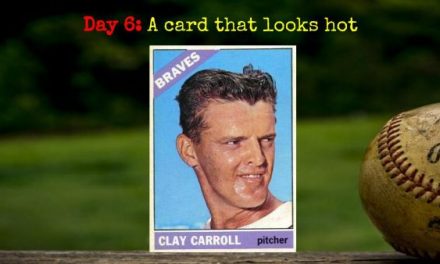