In late September of 1987, the Detroit Tigers were in a bloodsport battle with the Toronto Blue Jays for the American Leagues East crown.

And, with the top teams in the AL West bouncing around .500 as the season entered its final two weeks, it looked like whoever won the East would be able to waltz into the World Series.

So, with 13 games left to play in the season — including seven against the Jays — and trailing by a half game, Tigers General Manager Bill Lajoie went to work. His mission? Find some way to bolster his team for the coming battles, with a particular focus on plugging up his bullpen.

Now, every veteran baseball fan knows that it makes no sense to make a trade that late in the season since any September acquisitions are ineligible to play in the postseason. But Lajoie didn’t care about that because, if the Tigers couldn’t get the better of the Blue Jays down the stretch, there would be no October baseball in Detroit.

Armed with house money, then, the GM scoured the rosters of the teams left on Summer’s dust heap until his eye fell to the Chicago Cubs. Even though Andre Dawson was setting Wrigley Field on fire with his power stroke, the Cubs had been toast for months. 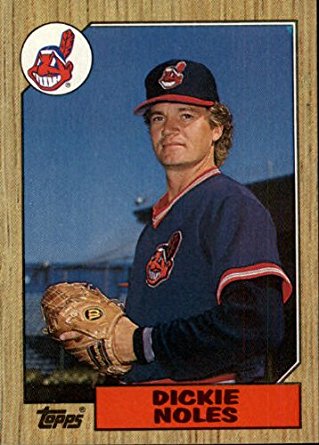 Lajoie made the call to Cubs GM Dallas Green and offered to take veteran hurler Dickie Noles off his hands. Green was happy to oblige, asking only for a player to be named later. Really, what good would a 30-year-old right-hander with a 3.50 ERA over 41 appearance do for a last-place Chicago team, anyway?

Better to let him walk for whatever goodies he might bring back a few weeks later.

So the deal was completed on September 22, 1987, and  Noles took his talents to Boston that same evening to join the Tigers.

Always There at the End

He made his way into that first game with Detroit, replacing Willie Hernandez with two outs and the bases loaded in the bottom of the ninth. Dickie coaxed Dwight Evans into a groundout to first to preserve the 8-5 Detroit victory and pick up the save.

Three days later in Toronto, Noles pitched 1 an 1/3 innings to close the game but gave up the losing run to the Blue Jays. The next night, on September 26, manager Sparky Anderson brought in Noles to face Juan Beniquez with the bases loaded and nobody out in the bottom of the ninth. Beniquez smacked a three-run, walk-off triple, to drop Detroit 3.5 games behind Toronto with just eight to play.

The next night, with the his team clinging to a 3-2 lead in the bottom of the 13th and having burned through much of his bullpen, Sparky turned to Noles one more time to face Jesse Barfield with one on and two out.

The odds went Detroit’s way that night, and Barfield grounded out to second.

But Sparky never again called on Noles, and Dickie watched from the dugout as the Tigers won five of their last seven, including a season-ending sweep of the Blue Jays to take the division crown. 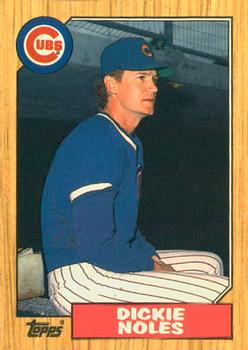 To everyone’s surprise, the Minnesota Twins not only won the AL West but then bounced the Tigers from the ALCS in five games. Less than two weeks after his team’s season ended, Bill Lajoie turned his attention back toward baseball decisions and preparing for the 1988 season.

One of his first moves? Closing up that trade with the Cubs by naming the player to be named later — it was Dickie Noles himself.

The Cubs apparently weren’t all that enamored with the idea of a reunion, though, so they let Noles walk as a free agent that November. He would sign on with the Baltimore Orioles the following season, and that’s where things start to get interesting from a baseball card perspective.

In particular, where would Noles land in the 1988 sets?

Before we answer that, it’s interesting to step back another year.

In 1986, Noles played the full season with the Cleveland Indians before signing with the Cubs as a free agent in April of 1987. That led to the following 1987 cards:

If you were a Noles nut or a diehard Tigers fanatic who has to have one of everything related to the team, you might have been disappointed that Noles didn’t make the end-of-year update/traded sets in a Detroit uniform. But given the tight time frames and relatively insignificant impact he made, it wasn’t really any sort of surprise.

How would the 1988 sets hand Noles frequent team changes, though? Well, read it for yourself:

No Donruss card. No Fleer card. No Score card. No update or traded cards.

It’s almost as if the card companies knew how the rest of Noles’ career would play out — three appearances and three franchises from 1988 through 1990 — and just decided to punt early.

Peeking Beneath the Cardboard Covers

Ah, but the black and white listing of that lonely 1988 Topps Dickie Noles card does not quite tell the whole story. Take a look for yourself: 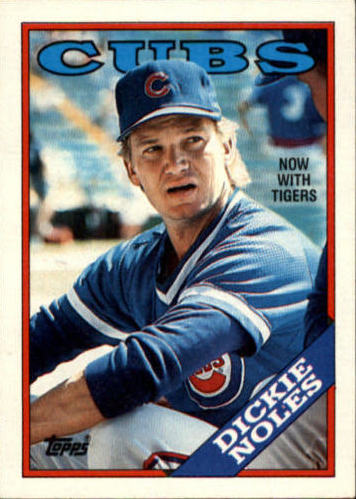 And more on the back of the card: 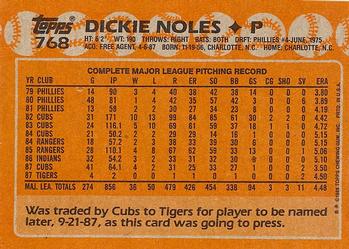 So, not only did Topps give a quick nod to the deal that Baseball Reference now lists as a “loan,” but T.C.G. also gave us a really solid idea of just how far in advance they plan(ned) each year’s issues.

Kind of adds a bit of extra romance when you think back to your childhood summers, doesn’t it?

While you were busy trying to fill in your checklist of current baseball cards, the folks at Topps were already hard at work on next year’s issue.

And you owe it all to Bill Lajoie, Dickie Noles, and Juan Beniquez. 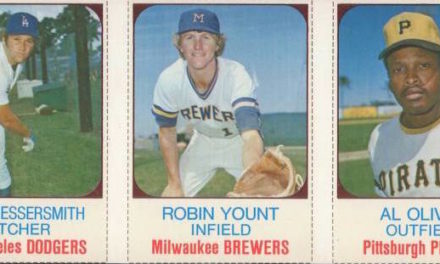 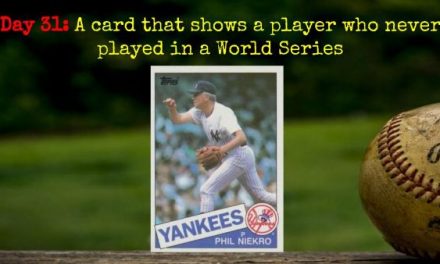 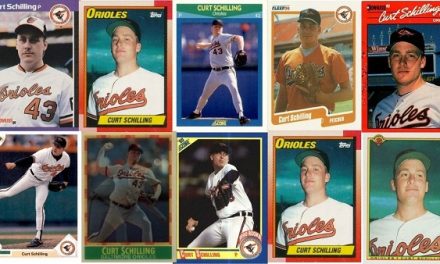