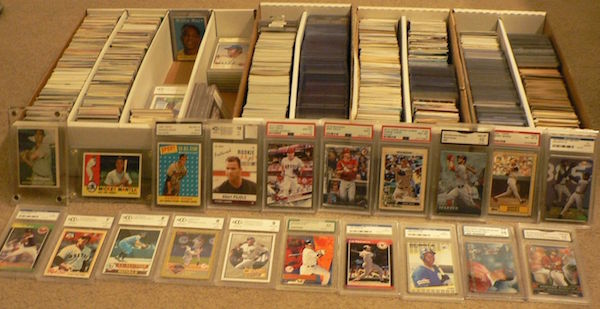 It’s the last Sunday in July, which means baseball talk in all corners revolves around stars more than ever.

For one thing, the trade deadline is just a couple of days away, which means contending teams are jockeying for the few available star players.

For another, this is Hall of Fame induction weekend — Chipper Jones, Vladimir Guerrero, Trevor Hoffman, Ivan Rodriguez, Jack Morris, and Alan Trammell all get their Cooperstown busts.

So, in this Flash Market Report, I made sure that every lot had some star power — All-Star, Hall of Fame power, in fact.

Here then, are five big, honking baseball card lots that changed hands on eBay during the week ending July 29, 2018.

I’ve said it before, and I’ll say it again and again — nothing is more exhilarating in this hobby than that moment you first spy a big old pile of baseball cards, especially if you can spy a few recognizable biggies peeking out at you.

This lot, dubbed by the seller as a “Huge Baseball Card Collection” certainly qualifies.

There’s tons more here, too, and the collection spans autographs, vintage, modern, chase cards, superstars, rookies, and something like six decades among the 3000+ cards that went out the door for $1750. 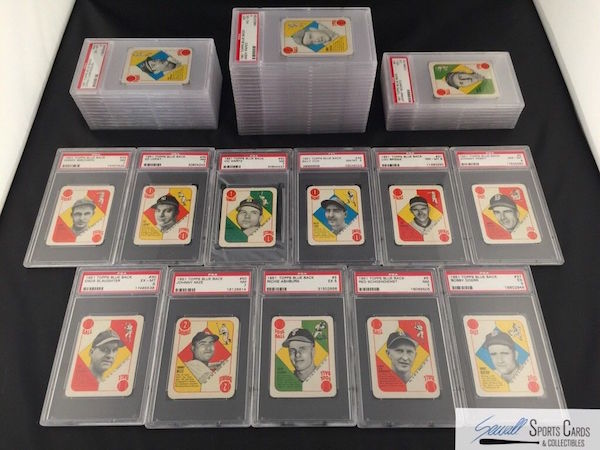 You’re a veteran collector, so you know that the ballyhooed 1952 set was not Topps first baseball card issue.

And you probably know that the old gum company issued two base-ish sets in 1951 — red back and blue back releases, both with a playing card motif.

But how often have you seen one of the two in complete-set form, especially with all the cards graded? Not too often, I’d wager.

Of the two sets, the Red Backs have the stronger checklist, but the Blue Backs are more scarce, which makes this lot all the more incredible.

In particular, all 52 Blue Backs in this set have been graded by PSA, with conditions ranging from 3-8. Hall of Famers Johnny Mize and Red Schoendienst both check in at 7 (NM), and the 8s include Billy Cox, Lou Brissie, and Johnny Pesky

(Incidentally, Pesky was a Boston Red Sox coach while Dick Pole pitched for the BoSox … the duo formed a real, live Pesky-Pole combo).

All of that seems good enough reason for the final price of $3000, don’t you think? 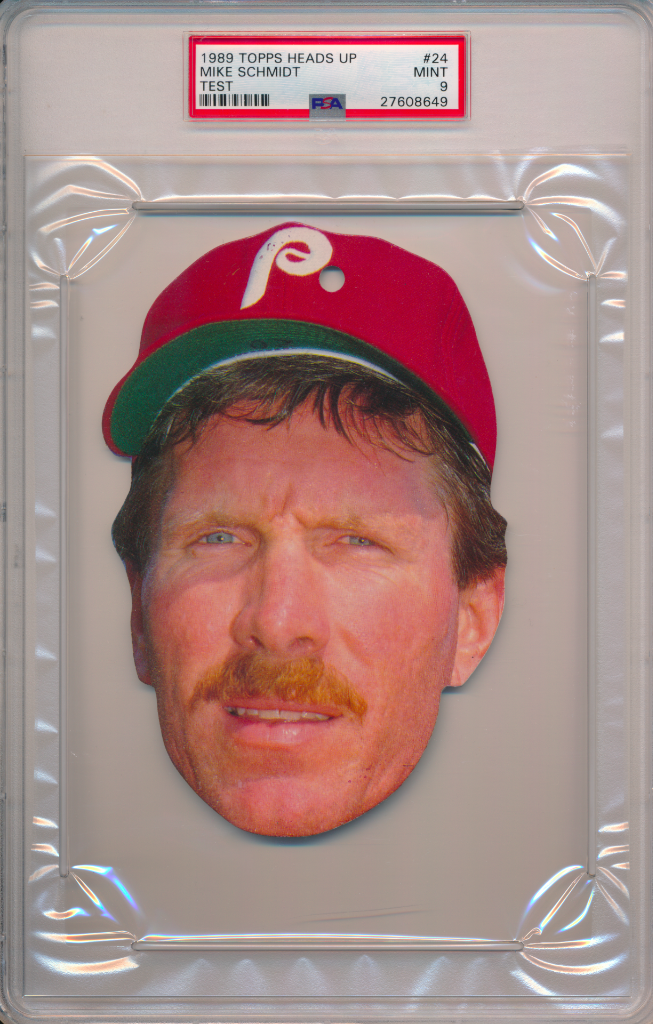 According to hobby lore, Topps released only 24 boxes of 24 packs each of their 1989 Heads Up test issue, and only in a few Pennsylvania stores.

I don’t know for certain if that’s all true, but the Heads Ups do seem to be quite scarce and, if you look at them the right way, quite disturbing.

On the other hand, how many chances do you get to own the disembodied head of a Hall of Famer, like the PSA 9 Mike Schmidt offered in this lot?

I’d say two at most since that’s the PSA population for this “card.” 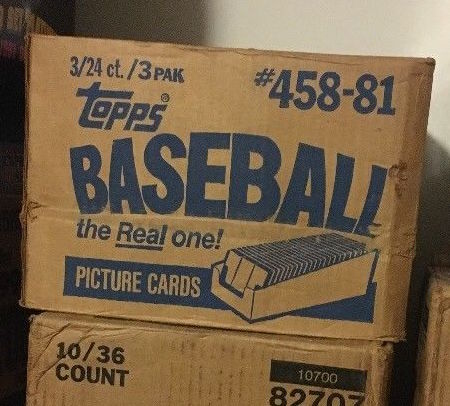 If you were a collector — or just a kid — in the early 1980s, you almost surely ran into those special Topps rack packs that were made especially for sale in the toy aisles of your local grocery store.

You may have forgotten about the packs since then, what with all the millions of cards issued in the intervening decades, but the memories will come rushing back whenever you see one again.

That’s the beauty of nostalgia in the broadest sense, baseball cards in general, and this eBay lot in particular. 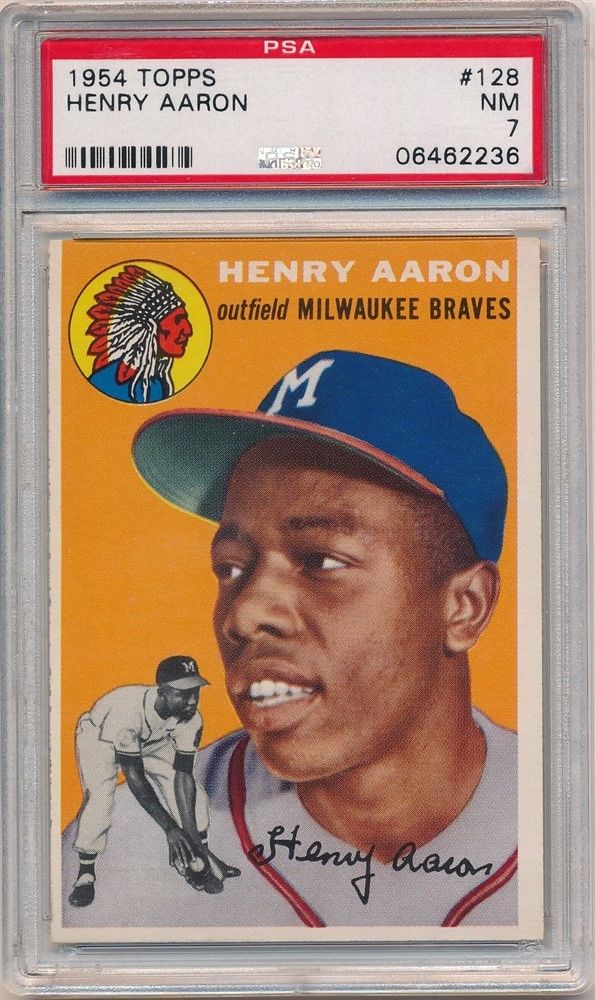 Who is the greatest player of all time?

Even after all these years, the general consensus seems to be that Babe Ruth was the greatest.

But it sure is hard to discount Hank Aaron’s case to be right there in that conversation, alongside the likes of Willie Mays, Ty Cobb, Barry Bonds, and, these days, Mike Trout.

The (former?) all-time home run leader is also tops in RBI and total bases, and he banged out 3771 hits on his way to a .305 batting average. 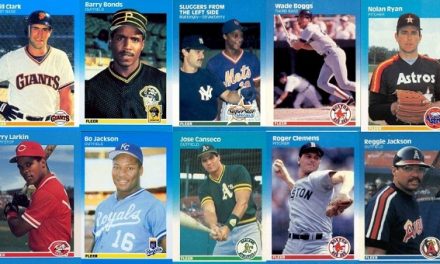 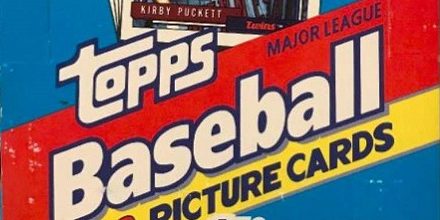 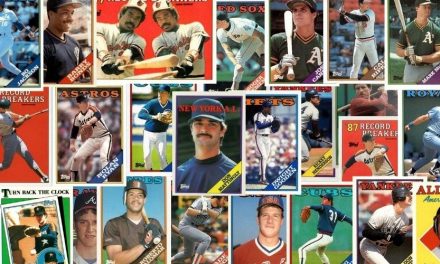