(This is Day 30 of our response to Tony L.’s 30-Day Baseball Card Challenge. See all our posts in this series here.)

When I was 12 years old, my sixth-grade class took a trip to a local campgrounds as a last fling the spring before we headed to junior high school.

It was a three-day excursion and would be the first time I was away from home. As a self-avowed momma’s boy and an inveterate comfort-seeker, I was trepidatious about the adventure at best.

Then, on the Friday before we left, I found out that I had to have a tetanus shot before we left on Monday. It was indignity after indignity as my mom took me to the hospital on Saturday morning to get my arm pricked.

Within a few hours, I had a reaction to the shot, my arm growing hot and red and eventually swelling up a few inches. My dad was concerned, but he’s always been a “rub dirt on it” type of guy where his own health was concerned, so he prevailed on mom and me to suck it up. It was just a shot, after all.

So I went to bed on Saturday and felt even worse on Sunday, but there was a silver lining: my parents were taking me to a baseball card show in Indianapolis that day.

My arm ached all through the day, and the pain and accompanying fever made me nauseous, but the exhilaration of fresh cardboard kept me going.

This was early April, so all the new sets were out and fully available at that point, and the Detroit Tigers were already running away with the American League pennant. The other baseball news that filtered into my corner of the world was that Pete Rose was making the final turn on his assault of Ty Cobb‘s all-time hit record.

Jettisoned by the Philadelphia Phillies after their World Series loss in 1983, Rose had inexplicably latched on with the Montreal Expos. While it was an ingnominious way for him to round out his career, Rose’s Canadian assignment at least meant he’d probably get regular playing time. The Expos were always scrambling to put fannies in their seats, and having Rose on-board for a record chase would help in that regard.

Now, my dad had never been a baseball fan, but he was a lifelong Hoosier and a former athlete, so he couldn’t help but soak in some of the flavor of The Big Red Machine a decade earlier. So when I started following baseball and baseball cards, he whipped out the few names he knew so we could speak a common language.

Thanks to Dad, I knew that 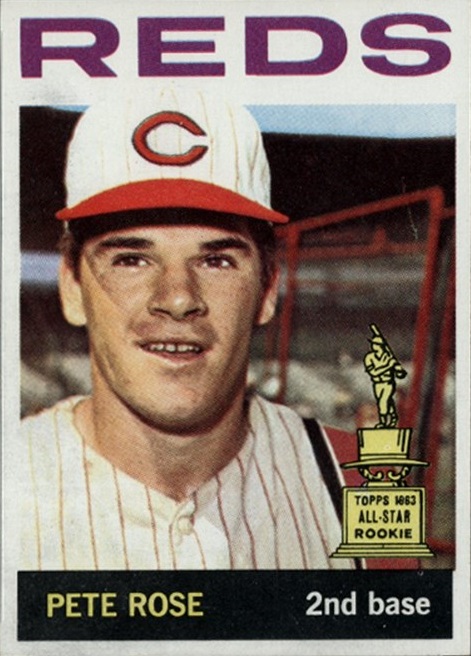 Rose, Joe Morgan, Johnny Bench, Tony Perez, and George Foster had been Big Stars not that long before even though my friends viewed them as nothing more than old men.

Coupled with Dad’s tacit encouragement, Rose’s record run stoked my collecting fires and gave me a target on which to focus: locate and buy any Rose card I could find.

It was against this backdrop that my parents and I stepped up to the table run by “Mike” on that spring Sunday afternoon. Mike was a local dealer from whom we’d bought a few minor Rose cards and a stack of old Baseball Digest magazines over the previous year. He was a fellow Rose fan and lit up when he saw me.

“Hey, I have something I think you’ll want to see,” Mike said.

Mom and Dad looked at each other as Mike popped open one of his display cases and fished out a card that pictured a young Pete Rose from the shoulders up. Across the top, “REDS” was printed in large purple block letters.

“This is a 1964 Topps card, the first one that shows Rose alone,” Mike explained.

I was already familiar with the 1963 Topps Rose rookie card by that point — it was legendary within the hobby — and the photo on the card that Mike held toward me looked awfully familiar.

Mike nodded toward the card. “Go ahead,” he said.

I could feel my parents tense up as I delicately plucked the Rose from Mike’s hands, but he nodded toward them, too, assuring them it was OK.

“Wow!” I said. “Isn’t that the same picture that’s on his rookie card?”

“Good eye!” Mike said. “Yeah, Topps used to use the same pictures multiple years, especially for young players. There wasn’t much competition in the baseball card market, so they didn’t have to try that hard.”

I could feel Dad lean closer, looking at the card over my shoulder. I glanced back at him just in time to see his eyes go wide, and I followed his stern gaze back to the front of the card.

That’s a Lot of Money for a Piece of Cardboard

The price sticker sealed my fate: $65.

“Yeah, and I’m afraid that’s a firm price. I heard that one of them sold in St. Louis last weekend for $100. He’s going to break Ty Cobb’s record, and his cards are only going to get more expensive the closer he gets.”

My dad just looked at Mike for a few seconds, then at my mom.

“Well, that’s a lot of money for a piece of cardboard.” It was the dad line of all dad lines when it came to baseball cards, and I’m sure it’s one most collectors still hear in their nightmares.

I took one last look at the Rose and handed it to Mike, catching a glimpse of the creamsicle back as he slid it into the display case.

“Sure, you bet,” Mike said. “Keep cheering those Reds.”

We walked out of the room and through the sprawling convention center toward the parking lot. At first, I was stunned by having held such a significant piece of hobby history in my hands, but 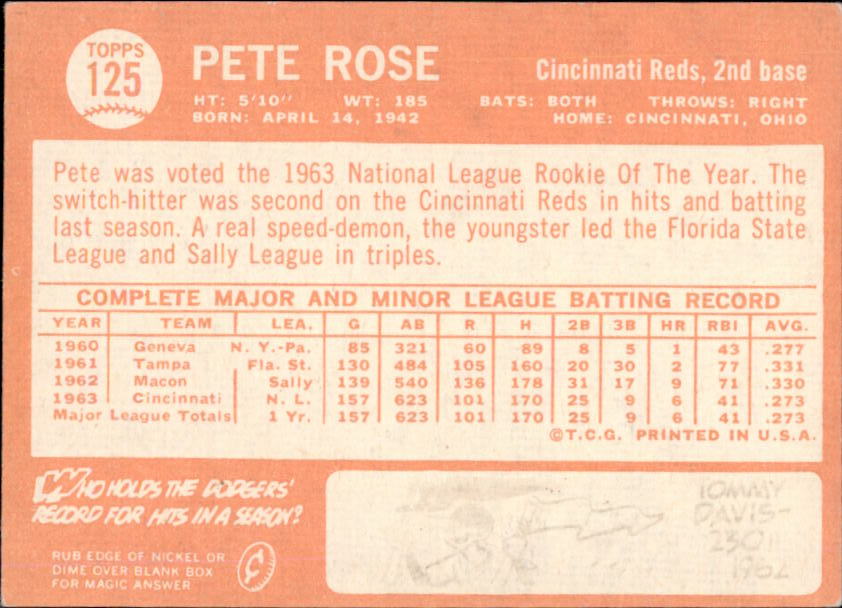 soon enough, I was digging into the packs I was lucky enough to come away with. Our conversation turned to where we were going to eat on the way home, and I mostly forgot about the Rose.

With the adrenaline of the moment gone, my arm started to hurt again, and my stomach felt queasy when we climbed into the truck a few minutes later. I wasn’t sure if I could eat, but I’d give it a try.

I slid across to the center of the bench seat and tried to position myself so Dad wouldn’t break my leg as he worked through the gears with the on-floor gear shift. Mom climbed in the passenger’s side, and, finally, Dad slid into the driver’s seat.

By that time, I was wrapped up in my own world — thumbing through a stack of cards, clutching my sore arm, and trying to coax my belly into the greasy meal ahead. I thought Dad was just being clumsy when he elbowed me in the side.

And when he jabbed my leg.

But then he did it again and, in that subtle way that all dad’s seem to cultivate over the years, said, “Here, can you hold this for me?”

He slid something flat from his palm and lay it on my lap.

It was the 1964 Topps Pete Rose baseball card.

For an instant, I couldn’t understand what I was seeing, like when a baby tooth falls out on the floor and you just stand there looking at it. Does that really belong to you?

“Really,” Dad said. “You heard Mike, right? Pete is going to break that record, and his cards are only going to get more expensive.”

I looked at mom, and she just smiled. I suspect she may have favored Dad with a certain sort of expression over the top of my head, but I didn’t see it.

What I saw was the most beautiful baseball card in the world, and it was all mine. From Rose’s gap-toothed smile on the front to the unscratched trivia answer box on the back, it was mine.

To this day, I’m not sure how Dad pulled off his deceit because I swear he was with us on the whole walk out to the truck. Maybe it was the fever or the distraction of my other cards, or maybe my dad really is all-powerful, as I sometimes suspected.

I can’t even imagine what Dad had to give up to buy that card for me. I’m sure we still ate something on the way home that night, but I’m not at all sure my dad ate lunch for the next week — maybe even the next month.

It was a pattern that would repeat itself over the years — my Dad making sacrifices to help me get where I wanted or needed to be. It happened with my 1986 Topps set, it happened when I went to college and stayed on the family dole, and it’s still happening as an adult — Dad is always there to help with projects or lend advice.

On that day, though, my new card gave me something to think about while I trudged through the rainy, muddy forest for three days, and it became the cornerstone of my collection. 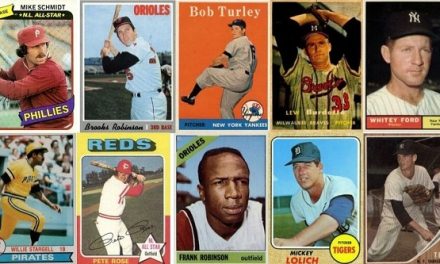