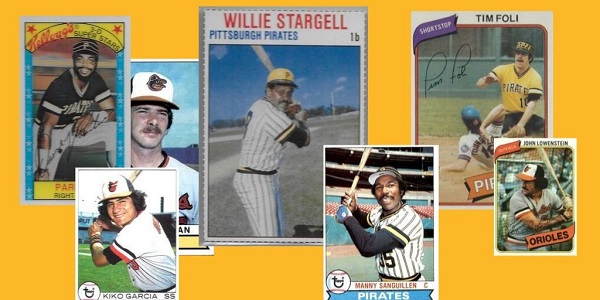 The 1979 World Series pitted the Baltimore Orioles against the Pittsburgh Pirates in a match-up that featured a lock-down pitching staff (Orioles) against a dynamic offense (Pirates).

Question was, which one was stronger — the irresistible force or the immovable object?

As it turned out, both strengths came to the fore that October, but some surprises popped up, too, just like they always do in baseball’s second season.

In the end, what looked like it might be a laugher of a Fall Classic turned into a thriller for the ages.

Let’s step back now and take another look at that 1979 World Series, game by game, through the lens of the baseball cards of the players who made the moments.

When a guy who is the favorite to win the Cy Young Award in a month takes the hill in Game 1 of the World Series, you generally expect big things to happen.

Or … not to happen, from an opposing-offense standpoint

Mike Flanagan pretty much lived up to those expectations against the Pirates in 1979, at least for much of the game.

With his teammates staking him to a 5-0 lead in the bottom of the first, courtesy of a Doug DeCinces home run and sundry Bucs miscues, Flanagan settled into a run of breezy innings to start the game.

The Pirates started chipping away in the middle frames, though, and with Bruce Kison chased in the first, their bullpen put the cuffs on the O’s.

With a single here and a sacrifice fly there and an error or two thrown in for bad measure, Pittsburgh scratched out three runs heading to the top of the eighth inning.

Baltimore manager Earl Weaver left his ace in the game, though, and Flanagan repaid him by retiring the next two batters before giving up two more hits — a rally?

Nah … Omar Moreno struck out looking to end the inning.

And Flanagan came back out for the ninth, too. A one-out single by Dave Parker turned into a stolen base attempt that was scored as a putout and an E6, leaving the Cobra safe at second.

Bill Robinson advanced him to third with a groundout, but Stargell flied out to short to end the game.

Flanagan bent about as far as a man could without breaking, and it must have been a gut-wrenching couple of innings … which sort of shows up on his expression on that 1979 Topps card of his.

While Game 1 was all about building a winter reserve (of runs) and then trying not to eat through it all before spring, Game 2 was a little more even.

After the Pirates touched Jim Palmer for two runs in the top of the second, Eddie Murray smacked a leadoff home run against Bert Blyleven in the bottom of the frame.

That was all she wrote in terms of scoring until the bottom of the sixth, when Murray got to Be Home By again, this time an RBI double after the inning started with a Ken Singleton Single.

Blyleven would finish the inning, and Palmer would pitch the top of the seventh, but then the bullpens took over.

The next two innings featured a flurry of activity on the bases from both teams, but home plate remained untouched.

Then, with two out in the top of the ninth, Bucs manager Chuck Tanner sent in Manny Sanguillen to hit for pitcher Don Robinson with two out and runners on first and second.

Manny delivered with a single to right off Don Sanhouse, driving in Ed Ott and moving Phil Garner to third.

Moreno ended the inning with a lineout to second, but the Pirates had their first lead of of the series.

Submariner/sidearmer Kent Tekulve made it stick in the bottom of the ninth, setting down Rick Dempsey, Kiko Garcia, and Al Bumbry in order.

Manny was the hero, though, and he looks characteristically giddy about the whole deal on his 1979 Topps card.

When Orioles shortstop Kiko Garcia came to bat against the Pirates’ John Candelaria in the top of the fourth inning in Game 3, Baltimore was down 3-2.

But, even facing a deficit against as imposing a figure as the Candy Man, and even though he was a light-hitting middle infielder, Garcia must have been feeling pretty good about his chances.

After all, he had already drawn a walk and smacked a double against the Bucs’ big lefthander.

And … well, Garcia did it agin.

The bases were loaded with Rich Dauer, Rick Dempsey, and Scott McGregor, and Kiko promptly unloaded them with a triple on the 1-2 offering from Candelaria.

Suddenly, the O’s were up 5-3, and Garcia would score a couple of batters later on a Ken Singleton single.

Garcia wasn’t done yet, either, as he’d touch Enrique Romo for an RBI single in the top of the seventh to put Baltimore up 7-4.

The hero of the Orioles’ 8-4 win, Kiko is beaming in the sunshine on his 1979 Topps baseball card.

Staring at the possibility of falling behind three games to one, the Pirates struck early and hard in Game 4.

Willie Stargell kicked off a four-run barrage in the second inning with a homer off starter Dennis Martinez, and the Bucs added one more in each of the fifth and sixth.

For their part, the Orioles answered with three runs in the top of the third, aided by more heroics from Garcia (a two-run double off Jim Bibby).

But the score stood 6-3 in favor of Pittsburgh entering the eighth inning, and the O’s were getting anxious about their chances.

Singles by Garcia, Singleton, and DeCinces, though, left the bases full with one out (Eddie Murray) when John Lowenstein came to bat against Tekulve in place of fellow outfielder Gary Roenicke.

On a 2-2 pitch, Lowenstein doubled to left field to drive in two, with the not-so-fleet Decinces stopping at third.

The floodgates were open, though, and Lowenstein was one of four more O’s to score before the inning was over.

That was all Baltimore reliever Tim Stoddard needed, and the Birds won, 9-6, to take a 3-1 series lead.

For Lowenstein, this was a story of redemption, as the Orioles had claimed him off waivers from the Texas Rangers the previous November.

That meant he didn’t get his first O’s baseball card until 1980 Topps, where we find him concentrating in the cage, preparing for whatever opportunity might come his way.

With one game left in Pittsburgh before heading back to Baltimore, and already down by two games, the Pirates knew they had to get their bats rolling against Flanagan in Game 5.

Problem was, he wasn’t having any of it.

Through 5 1/2 innings, the game’s only run had come on a ground-ball double play off the bat of Dauer, driving in Roenicke against Pirates’ starter Jim Rooker in the top of the fifth.

The Bucs finally scratched out a couple of runs in the bottom of the frame to take the lead, but they needed some insurance.

It came in the unlikely form of shorstop Tim Foli, who tripled off reliever Stoddard in the bottom of the seventh, driving in Omar Moreno.

Foli himself scored a batter later when Dave Parker doubled off Tippy Martinez.

But Foli wasn’t done yet, as he singled to drive in two more Pirates teammates in the bottom of the eighth, blowing the game open at 7-1.

Like Lowenstein, Foli had been an off-season acquisition — traded by the Mets for Frank Taveras — and didn’t get a Pirates card until his 1980 Topps doozy.

That one shows him in his more natural habitat of the middle infield in a great action shot that displays the Bucs pillbox hat to good effect.

After a day off to think about what they had done, the Bucs and O’s headed back to Baltimore for Game 6.

There was a lot on the line for both teams …

The Pirates, of course, were trying to stave off winter for the second-straight game.

And the Orioles had the pressure of closing out a World Series at home … with dark thoughts about what would happen if they failed and allowed the Series to reach a seventh game.

All of which is to say that starters Jim Palmer and John Candelaria were locked in and laser-focused on the task at hand.

To be sure, there were some chinks in the armor that late in the season, and both teams made some noise from the batter’s box and on the bases.

But, through six innings, the moundsmen remained unscathed, and the score stood 0-0.

With the Bucs coming to bat for the seventh time, Palmer continued on his way, striking out Lee Lacey to start things off.

And then, big Dave Parker also singled to right, driving in Moreno and moving Foli to third.

Willie Stargell picked up Foli with a sacrifice fly to left before John Milner flied out to end the inning.

But the Pirates were up by two, and they never looked back.

Tekulve relieved Candy in the seventh, but Palmer stayed in long enough to give up another two runs in the bottom half.

By the time Tim Stoddard relieved Cakes in the eighth, the final score was already on the board … PIT 4, BAL 0.

Parker is the one who broke the seal on the shutout, and you could almost hear “We Are Family” wafting in from Pittsburgh as Pirates fans fired up their disco machines and caressed their groovy 1979 Kellogg’s cards of the Cobra.

So we were on to Game 7, with the Orioles trying to stop their bleeding and the Pirates trying to pull of the rare feat of winning a Fall Classic after falling behind three games to one.

As in Game 6, the hurlers came out dealing, and kept the game scoreless through the top of the third.

In the bottom of that inning, though, Rich Dauer led off with a home run against Jim Bibby, and the Orioles were in the driver’s seat again.

That situation held steady all the way to the top of the sixth.

After Parker grounded out, Bill Robinson singled to leftfield to bring up Willie Stargell.

Now, Pops was 39 years old and looked the part, but he was the unquestioned leader of the Pirates and a favorite to win the National League MVP award (he ended up sharing that honor with Keith Hernandez of the St. Louis Cardinals).

Lost in this conversation so far is that Stargell’s two home runs mentioned above were the only Pirates dingers all Series … until this at-bat against Scott McGregor.

Willie drove the first offering deep into right field, and the Bucs were up, 2-1.

By that time, Grant Jackson had relieved Robinson for the Pirates, and then Jackson gave way to Tekulve in the eighth.

Not one of those guys gave up another run to the Orioles.

The Pirates weren’t interested in a bottom-of-the-ninth-inning scenario where they were up by just one run, though, so they worked Orioles relievers Tim Stoddard, Mike Flanagan, Don Stanhouse, Tippy Martinez, and Dennis Martinez for two more in the top of the inning.

You have to hand it to Weaver for throwing everything he had at the Bucs, but, in the end, it didn’t matter.

World Series MVP Willie Stargell was too much in his signature moment, and that made his 1979 Hostess card even sweeter. 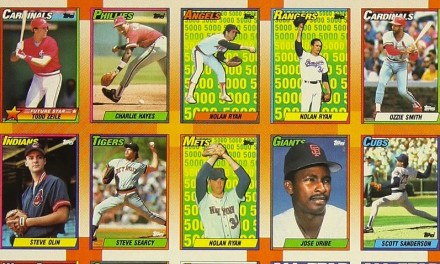 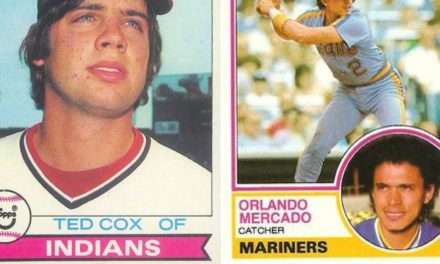