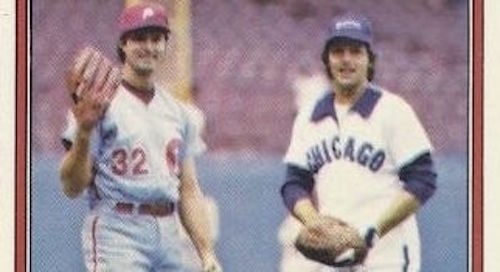 (This is Day 2 of our response to Tony L.’s 30-Day Baseball Card Challenge. See all our posts in this series here.)

Baseball cards and I had a rocky start. 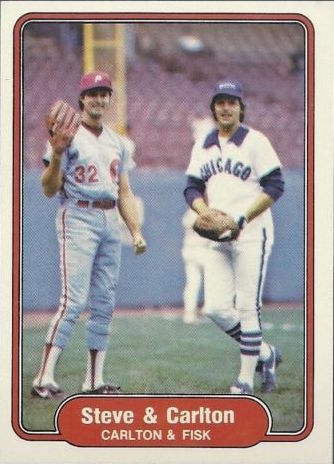 me a pack of baseball cards instead of the toy I was expecting.

They were dark and depressing, and I wanted nothing to do with them.

Of course, I was happy to have those 1981 Topps cards two years later when I woke up one morning and decided baseball was the bee’s knees.

I still thought they were dank (and still do), but they were great for starting to learn about the game. Their soft brown cardstock also made them fun to bend and crumple.

But as much as I appreciated all of the cards in my meager collection, I was really drawn to the “special” cards.

And, in my prepubescent mind, nothing was more special than the array of corny combo cards that Fleer unleashed throughout the Eighties.

Looking back, this may very well have been the pinnacle of multi-player cards, surpassing even Topps’ own foray from the late 1950s and early 1960s — in creativity and cheese if not in monetary value.

All of them were spectacular — Pete & Re-Pete, Holland Tunnell, Yankee Powerhouse.

But the one that mesmerized me like no other was card #632 in the 1982 Fleer set, depicting Steve Carlton and Carlton Fisk as they warmed up before the 1981 All-Star Game in Cleveland, OH.

The photo was fairly generic and, with my limited knowledge of the game at that point, I really didn’t know what jobs these guys held down on the diamond.

But those names — oh my!

I mean, if you read across the front of the card, you found “Steve & Carlton” — Steve Carlton — on top and “Carlton & Fisk” — Carlton Fisk — on the bottom.

And if you read up and down?

I was sure it was some sort of word witchery, and I’m still not sure it’s not.

Did the card show one guy or two? Or one guy with a photobomb by a second? Or maybe Steve Carlton and Carlton Fisk were some sort of baseball Voltron duo and the photo o 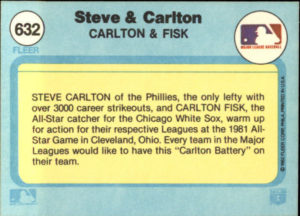 n this card caught them just before they … merged?

No matter how you looked at the thing, the names of the two men on the card remained interlocked but somehow distinct. It was like I had discovered some sort of Escher creation long before I was ever introduced to ol’ M. C.

It was also one of the first examples of wordplay I can recall seeing outside of my own head, and it reinforced my budding ideas about how cool language could be if you were willing to monkey around with it a bit.

Later on, of course, the baseball significance of these two men became clear to me, which served only to lift my esteem for card #632 even higher.

So, when tasked with picking “a card with more than one player on it,” the choice was clear.

With apologies to Managers’ Dream and Rival Fence Busters and even Letting Go of the Raines, there has never been a combo card to rival “Steve & Carlton” or “Carlton & Fisk” and probably never will be.

Although … I’m still not 100 percent sure the card actually does feature more than one player. 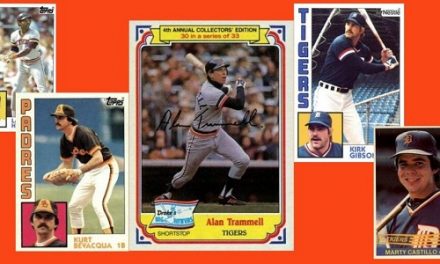 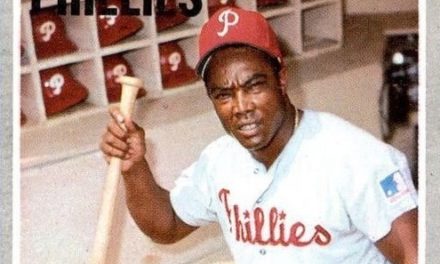