This is Day 1 of my 2019 Spring Training Challenge, which means I’ll be writing abouta card that shows a player in his old uniform.

For me, this assignment brings visions of the big trades and free agent signings from my childhood, roughly the 1980s.

The Bengals ran the table in the old American League East, holding first place wire-to-wire, and winning the division by 15 games over the Toronto Blue Jays.

The postseason was pretty much a formality, as the Tigers swept the Kansas City Royals in the ALCS and then met the San Diego Padres in the World Series. The Padres were a good story in their own right, having taken out the upstart Chicago Cubs (who had taken out the upstart New York Mets in the NL East) in the NLCS. The Pads also had a young batting title winner on their roster — one Tony Gwynn. Ever hear of him?

Didn’t matter to the Tigers, though, as they downed San Diego, four games to one. 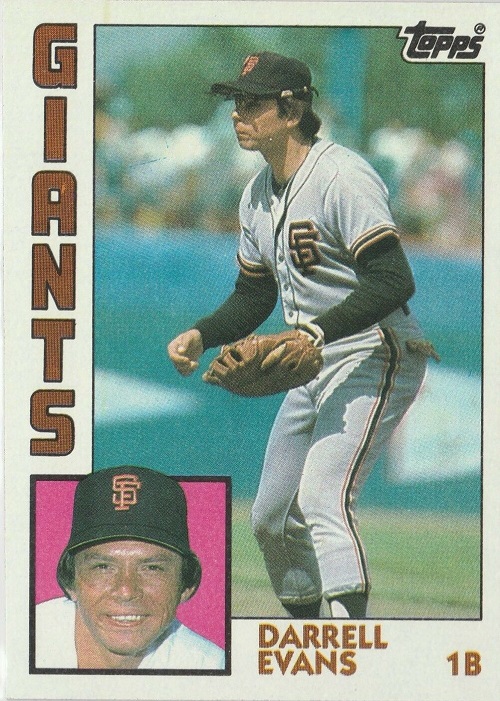 Now, most of that Tigers team consisted of homegrown players who all peaked — or close to it — at the same time. Guys like Alan Trammell, Lou Whitaker, Kirk Gibson, Jack Morris, Barbaro Garbey, Chet Lemon, Dan Petry.

There was one notable “outsider” who contributed in a big way — closer Willie Hernandez made 80 appearances and pitched to a 9-3 record, with a 1.92 ERA and 32 saves. That was good enough to garner him both big American League awards … Cy Young and MVP.

Guillermo had pitched for the Philadelphia Phillies “Wheeze Kids” team the year before, and he appeared with the Phils on his 1984 baseball cards, so he’d definitely qualify for this piece.

But there was another guy on that ’84 Tigers team who sort of toiled in the shadows of his more flamboyant teammates and who, truthfully, didn’t play all that well in 1984.

After the San Francisco Giants let him walk as a free agent, aging slugger Darrell Evans signed on with Detroit to be their DH during his age-37 season. Though he had smacked 30 home runs on the Bay in 1983, that was his highest total since he hit 41 with the Atlanta Braves way back in 1973. And, even though he was (partially) hanging up his third baseman and first baseman gloves, no one could expect Evans to match that power output again.

In 131 games for Detroit, Evans managed just a .232, 16 HR, 63 RBI output and sort of faded from whatever little bit of limelight he had garnered in his career. It didn’t help that he hit .061 in the World Series, either.

Probably just as well that he appeared on Giants cards all summer long, like his 1984 Topps issue. 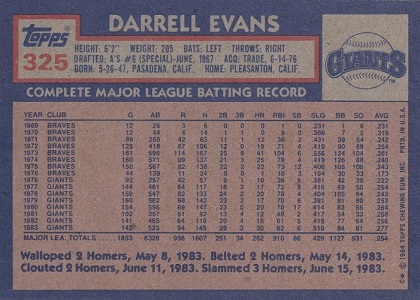 Things didn’t go quite so well for the Tigers in 1985, though. They sported a winning record all season long but fell out of first place on April 30 and never got back there, finishing in third place in the East. Along the way, Sparky Anderson started to make some adjustments to try and rev up his team, and one of those was installing Evans as his regular first baseman.

Whether it was getting back on the field with more consistency or just a matter of adjusting to a new league and a new park (Tiger Stadium), Evans found his old power stroke, and then some.

Maybe more importantly, that summer of 1985 gave Evans some room to breathe and helped him tack on another three productive power seasons to his career. From 1986-88, he hit 85 home runs and collected 248 RBI, good for 9 WAR if your Sabermetrically inclined.

Though he finished with a forgettable one-year return engagement with the Atlanta Braves in 1989, Evans’ late push left him as one of the top 20 or so third basemen of all time and with 414 home runs to his name. It’s not inconceivable that he’ll get some Hall of Fame consideration from the Modern Baseball Era Committee one of these years.

Above all, though, his geriatric power show made Evans an undeniable part of Tigers history and leaves his 1984 Topps card looking not quite right. 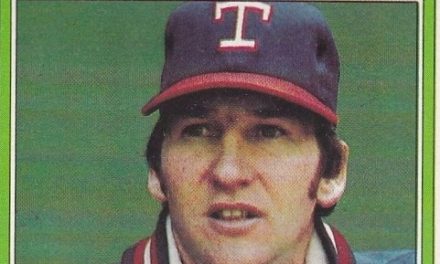 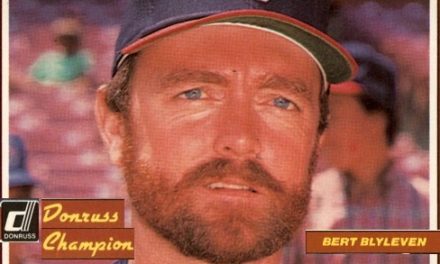 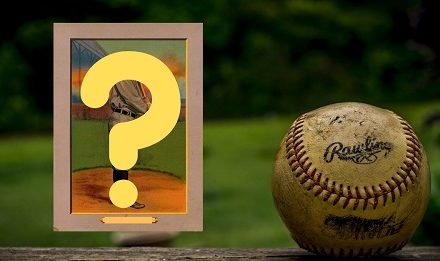 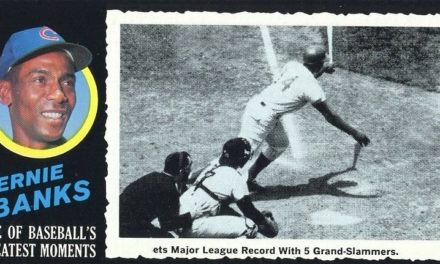