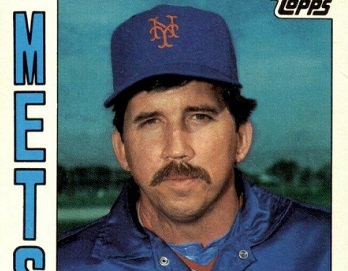 When modern fans look back on those great Baltimore Orioles teams of from the mid-1960s through the early 1970s, Davey Johnson isn’t usually the first name that comes to mind.

And that’s to be expected considering that club featured future Hall of Famers Frank Robinson, Brooks Robinson, and Jim Palmer, along with other standouts like Paul Blair, Boog Powell, Mark Belanger, and a rotation that could stand with the best the game has ever offered.

Truth is, though, Johnson locked down the second base job in his first full season, 1966, and didn’t let go until the O’s traded him to the Braves after the 1972 campaign.

If rookie card mania had been a thing back then, the 1965 Topps Blair/Johnson combo might have garnered some looks:

At age 30, though, and with a career high of 18 home runs a couple years in the rearview, it’s likely even the Braves didn’t expect what happened in 1973.

That summer, Johnson crushed 43 homers to top the Braves, who also got 41 from Darrell Evans and 40 from the home run king himself, Hank Aaron.

Alas, Johnson was never quite the same after that tear, and diminished playing time in 1974 deteriorated to an outright release in April of 1975.

Johnson wasn’t ready to hang up his spikes, though, and he was able to sign on with Japan’s Yomiuri Giants. Over parts of two seasons in the Japan Central League, Johson demonstrated that his power stroke was still intact, clubbing 39 homers.

That was enough to land him a deal with the Phillies, and he played in Philadelphia through August of 1978. A late-season swap to the Cubs garnered Johnson his final 24 games of big league action.

After a run as player/manger with the Triple-A Miami Amigos of the Inter-American League in 1979, Johnson was done between the lines at age 36.

But the “manager” bit of his title with the Amigos got him noticed, and the New York Mets hired him to pilot their Double-A affiliate, the Jackson Mets, in 1981.

Two years later, he was on the climb, graduating to the Triple-A Tidewater Tides.

That marriage produced a 71-68 record and earned Johnson another promotion … all the way to Shea Stadium.

In 1984, the Mets were coming off a long run of futility, but there was hope in the form of budding young superstars, like 1983 National League Rookie of the Year Darryl Strawberry.

And, as the world would soon learn, a teenager named Dwight Gooden was ready to dominate hitters from a Major League mound.

While Doc and Straw were busy building their legacies on the diamond, Johnson went about analyzing the game in ways that hardly anybody in his position had before — with numbers and a computer and an eye toward fact-based decisions.

Many have credited him with helping to usher in the age of Sabermetrics.

Whatever your take on advanced statistics and their proliferation in the game, the magic cocktail that Johnson and his charges whipped up that summer turned the Mets around in a hurry — they improved from 68-94 in 1983 to 90-72 in 1984. If it weren’t for an equally surprising Chicago Cubs team, New York might have taken the NL East flag.

That fall, the collecting world flocked to the Topps Traded set, and the first-ever Fleer Update issue, clamoring for the first cards of Gooden.

But when we leafed through that 132-card box of Topps gold, we were treated to a maybe unexpected treasure. A second-chance Davey Johnson rookie card:

Two years later, there wasn’t much doubt who the best team in baseball was — the Mets romped through the National League to the tune of 108-54 and then beat the Astros in six games in the NLCS.

The World Series was a colossal seven-game struggle with the Boston Red Sox, but the Mets emerged with the trophy.

Johnson lasted another three-plus seasons in New York, guiding the Mets to another division crown (and 100 wins) in 1988 and winning seasons in 1987 and 1989.

He went on to land four more managerial stints, with the Reds, Orioles, Dodgers, and Nationals — each less than three full seasons. At each stop, he either won a division title or effected a marked improvement in his new team’s record.

At every stop, you can bet a bevy of fans unfamiliar with the mand went searching for information about their new skipper.

You can bet, too, that most were surprised at what they found — that stellar playing record, and the flashes of power.

And maybe, if they were collectors, that Dwigth Gooden-vintage rookie card of Davey Johnson, manager.

Johnson’s crowning achievement with the Mets, of course, was guiding that 1986 team to a World Series championship, and artifacts from that club are always in high demand. Pieces like this one offered up on eBay, for example: 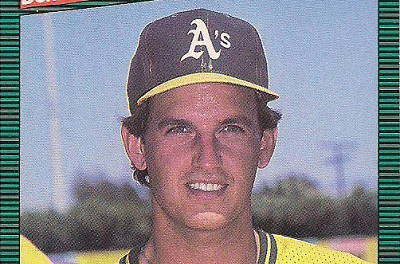