(Check out our other related card posts here.)

Way back then, we were eager to get our hands on any cardboard we could find, and we were all convinced of three things:

Thirty years on, those first two things have proven impossible, but our youthful fervor help to ensure the third came to pass.

Yes, we bought everything, but we also clamored for better photography, better design, better card stock. As it turned out we were willing to pay for those improvements, as evidenced by the success of Upper Deck in 1989.

But before that, Score was the testing ground — the proof-of-concept.

Here was a set with beautiful action photos, color pics on card backs, even “tamper-proof” packaging. We ate them up to an extent that proved to UD they were on the right track.

Underneath Score’s shiny surface, though, troubles were already brewing.

We didn’t know at the time that the set was just as overproduced — or more so — as the other cards that year.

We didn’t know they wouldn’t hold their value.

But if you were a longtime hardcore collector in 1988, there was something that felt just … off … about the cards.

They were too shiny, too solid, too uninteresting.

To be dramatic about it, they had no soul.

And even if you didn’t recognize that fact right away, there were indicators even at those early stages that all was not well.

Here are five of those Soulless Warning signs that 1988 Score baseball cards screamed from every pack. 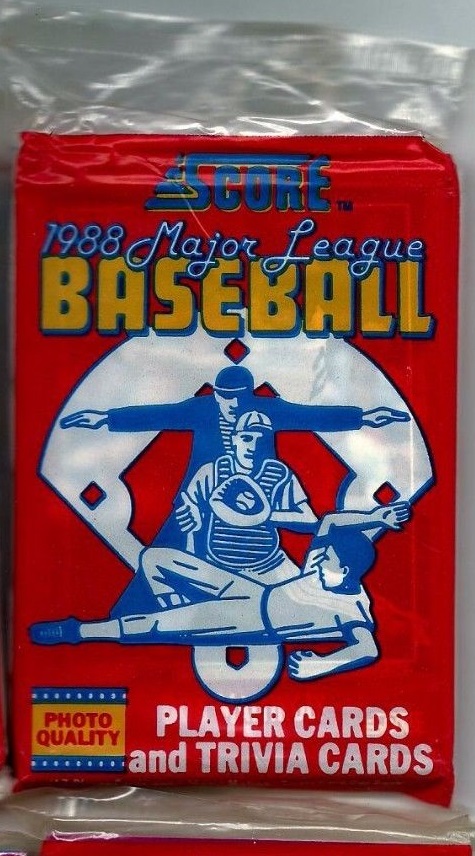 By 1988, we were all comfortable with the wonders of cellophane baseball card packages — we’d been searching through cello and rack packs for years looking for our favorite stars. And, while they didn’t impart the tactile experiences of ripping (or carefully unfolding, as the case may have been) wax wrappers, they were still part of the hobby fabric.

When Score pushed out their shiny new boxes, though, one of the first things we noticed was that those “wax” boxes were longer than their Topps, Fleer, and Donruss counterparts. One look inside told us why …

The cards were wrapped in colorful plastic, with extra space at the top and bottom for crimping. The result was an extra-long pack that required more room than the tight wax packs of the other companies.

But the problems with these packs went way beyond long boxes.

For starters, the excess room in each pack let the cards slosh around, and the floppy pack tops and bottoms made for a messy, crinkly box interior.

And, while the colored plastic would ostensibly make it harder to search packs, it didn’t take long for folks to realize you could still partially see the cards underneath. And, if  you moved things around just right, you could really get at a pack’s content.

How many old Score packs have you seen with thumb-nail gouges left by would-be hackers trying to get a peek inside? Why, 1988 Score is a plastic-and-cardboard archaeological dig!

But those plastic packs did something even worse … 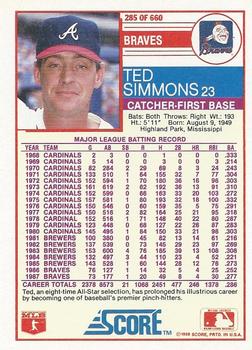 Collecting baseball cards is an immersive experience if you do it right. All of your senses are involved:

The cards themselves are visual sensations, and veteran collectors can often identify specific cards based on just a glimpse of a corner or a hunk of card-back text.

Each type of card makes a particular sound as it glides across one of its brethren. Old, mushy Topps cards, for example, sound like Q-tips sliding against a block of cheese. Thick, crisp Upper Deck cards sound like polished nails tapping on a glass desktop. Everything else is somewhere in between. Often, there are other sounds in the background — a baseball game played over a transistor radio is always a good choice.

Likewise, every collecting experience has a certain physical feel to it. Old Topps cards are rough and fuzzy. Upper Deck cards are slick and hard. Wax packs are thick and sticky. Cello and racks are smooth and crinkly. And 1988 Score packs? Sorta crinkly, sorta papery, sorta puffy. In itself, not a soul-killer for Score.

Baseball card taste had already taken a real hit by 1988. After the courts came down on Fleer and Donruss for issuing their inaugural cards with gum in 1981, Topps was the only game in town when it came to pulling confections from your wax packs. So for most of us oldies, the taste of baseball cards is the taste of Topps bubble gum. You can offset the deficiency of the other companies in this area by popping open a box of Bazooka right along side your Score (and other) card packs.

Hand-in-hand with taste is smell, and this is where Score’s cardboard soul really starts to slide.

Donruss baseball cards are a bit stronger in the aroma department — a peculiar mix of cardboard and ink, with that same essence of wax, that always lets you know you’re popping open a Big D pack even if your eyes are closed. It’s not altogether unpleasant, even if it’s not Topps.

Score baseball cards … man, these things stink. Literally. From the moment you pull open the box top, your olfactory system is attacked by an industrial bouquet that builds as you open more packs.

Plastic and more plastic (Magic Motion style) and ink (or other photo-related chemicals) and space-age cardboard — it’s a cocktail that can make even the stoutest among us dizzy and takes your mind anywhere but to baseball cards. 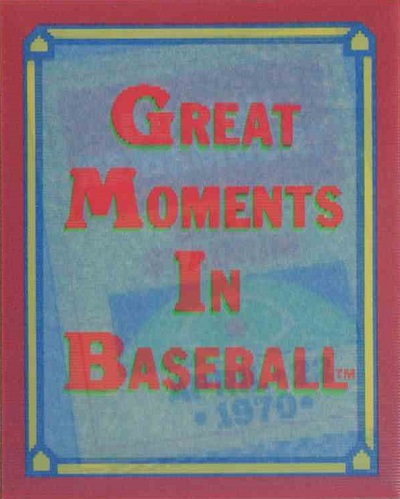 Every baseball card pack needs some sort of insert, and gum, stickers, and puzzle pieces were already taken when Score came along. So they opted instead for a set of  “Great Moments in Baseball” trivia cards that use the same Magic Motion “technology” that made Sportflics so … um … popular in the years immediately preceding.

Aside from being just about unreadable and only mildly interesting, the trivia cards had a few other problems:

As a result, “Great Moments in Baseball” are the cockroaches of the hobby — they’re everywhere, but nobody wants them or knows how to get rid of them. 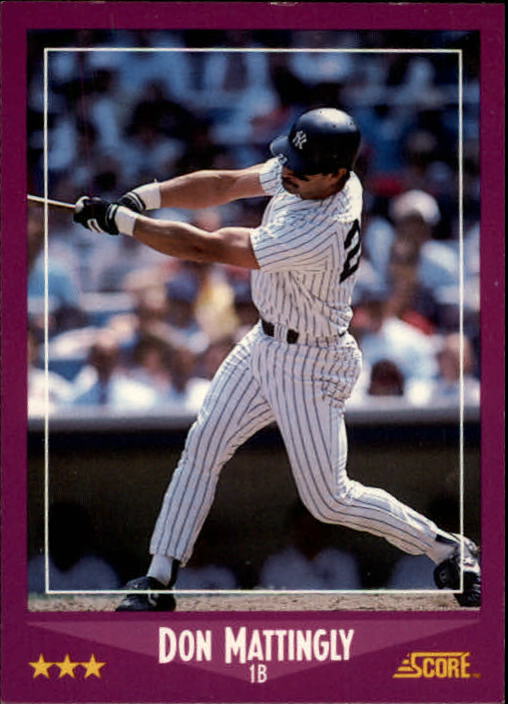 In 1988, Score was heralded for its awesome photography, and for good reason.

Clear, crisp action photos dominated that inaugural set (and the ones that followed) and stood in stark contrast to the goofy, grainy, airbrushed monstrosities that sometimes infiltrated the other brands at the time.

There was an old episode of The Twilight Zone where a man died and then found himself in a personalized Heaven. In the protagonists’s version of nirvana, everything was perfect — perfect food, perfect apartment, perfect bevy of women swarming around him ever day. In life, the guy was a pool hustler, and his Heaven of course featured a pool table.

And when the dude took up his cue?

After a few days of perfection, the guy started complaining to his caretaker — God or Gabriel or the like, we’re left to presume — that he wanted some variety.

A mole on the cheek of one of the girls.

A ham sandwich that was too hot or too cold.

The possibility of missing a shot.

After all, the dead guy reasoned, it was his Heaven. Why shouldn’t he be able to be happy — whatever form that may take?

To which “God” laughed. A full-on belly guffaw that sent shivers up the audience’s spine even though we already knew something bad was brewing.

“What gave you the idea this was Heaven?” the gatekeeper asked finally, or something to that effect.

It turns out 1988 Score was kind of like that (Upper Deck would be even more so, eventually).

After 10 or 20 slinky packs of perfect photography, the soulful collector started to wonder — where are the posed shots? Where are the hatless wonders? The airbrushing? Claude Raymond with his fly unzipped?

Where, oh where, was the character?

I’ll tell you where … it was in your good ol’ local wax pack.

And Score couldn’t score on that front. 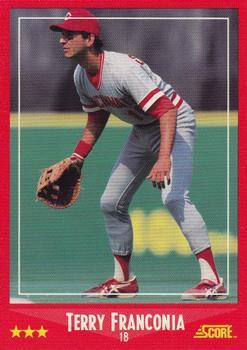 As “perfect” as the 1988 Score baseball cards were, they had flaws beyond just too much perfection.

I mean, check out the list of errors and variations at The Trading Card Database. Pretty massive but maybe not unexpected for a first-time issue. And, after all, the other manufacturers sill had some gaffes going each year, too.

But here’s the thing …

Score was supposed to be better than that.

And even worse, several of these errors involved misspellings of player names. Not just on card backs, either.

Right there on the front of card #126, Dave Valle became Dale Valle.

Bob Brenly and Lee Mazzilli saw their last names spelled wrong on both the fronts and backs of their cards.

But the one that really rubs your spine the wrong way is card #297, Terry Francona.

Now, back then Francona was a light-hitting utility man who was nearing the end of his uninspiring Big League career. He had played for the Cincinnati Reds in 1987 and would spend 1988 with the Cleveland Indians before wrapping up with the Milwaukee Brewers in 1989 and 1990.

Francona was well-known and respected around the game, though, and his father Tito Francona had been a legitimate star for the Indians in the late 1950s and early 1960s.

All of which is to say that issuing a baseball card of Terry Franconia was unacceptable in 1988.

More than 30 years later, with Tito (Junior? The II?) looking like a Hall of Fame manager, the flub seems even more egregious.

It’s like when your grandmother talks to you about FaceSpace.

Or when your mother or wife, knowing you’re in IT, regularly asks you how your “little programs” are coming along.  (Projecting for a friend.)

Of course, the upside to having a great-looking, mass-produced, soulless 30-year-old set on our hands is that you can get them for cheap.

And by cheap, I mean you can find boxes and sets and singles for single-digits most of the time on eBay and on Amazon (affiliate links).

Any way you cut it, that’s pretty cool …

… as long as you’re OK with unsoulful baseball cards.

(Check out our other related card posts here.) 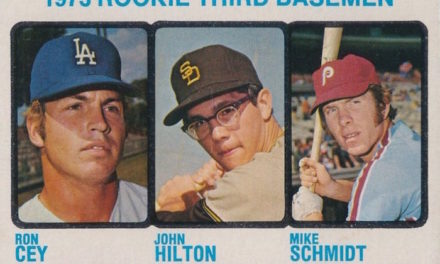