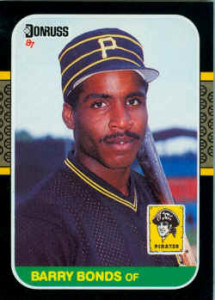 Thumb through any album of Barry Bonds baseball cards, and it’s easy to see that the all-time home run king really did change quite a bit from the his rookie season in 1986 until he hung up his spikes after the 2007 season.

But collectors who were paying attention knew even early in Bonds’ career that he wasn’t always himself in the public eye.

Or rather, he wasn’t always himself when presented to the public on little rectangles of cardboard each spring and summer.

And we didn’t have to wait long for proof of his chameleon nature, either, thanks to a gaffe in the 1987 Donruss Opening Day set.

Make the Team, Make the Set

Major League hopefuls may not have realized it at the time, but Spring Training was doubly important in 1987, and Donruss was watching all of the 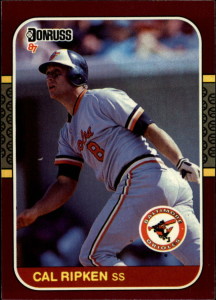 action more closely than ever.

In those pre-Internet days, the third card company — after Topps and Fleer chronologically — was planning something special for collectors and had little trouble keeping their operation under wraps. But once each team had their first game in the books, Donruss fired up their printing presses and cranked out an innovative set.

The 1987 Opening Day issue showcased the starting lineups for each of the 26 Major League teams on (surprise!) Opening Day, plus a series of team checklists. 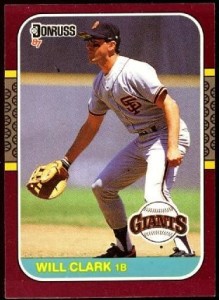 And given that 1987 was the heyday of the rookie-card craze, collectors were eager to get our hands on as many pasteboards of the youngsters as we could. Lucky for us, there was plenty of promise in those maroon-bordered beauties, including Wally Joyner, Will Clark, Kevin Mitchell, Bo Jackson, and Barry Bonds.

These weren’t “true” rookie cards since they weren’t available in packs — Opening Day could only be purchased as a complete set — but they helped slake our hunger.

Of course, with such a quick turnaround between Opening Day and the cards’ issue during the season, it wouldn’t have  been surprising if something went awry.

So Barry Nice, They Included Him Twice!

As it turned out, the quality of Donruss’ new-concept set was tight, and the cards were well-received. The maroon borders proved a nice complement and welcome respite from the chip-crazy black of the base set. 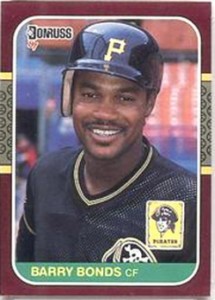 ome disagreement about whether the sets should be opened and broken into singles or kept intact in their original cellophane bricks, but all in all, collector reaction was positive.

Enough of us busted a few sets early on for a secondary singles market to develop, though, and one of the most talked-about of those was Barry Bonds at number 163.

Even at that early stage of his career, Bonds was viewed as one of the most talented players in the game. He was the son of Bobby Bonds, an electric performer during his own turbulent Big League run, and he had finished sixth in the NL Rookie of the Year balloting on the strength of 16 home runs and 36 stolen bases in just 113 games.

At 22, he had the whole baseball world in front of him.

Curious then, that Donruss had gone to the trouble of including Bonds in their Opening Day set but picturing teammate Johnny Ray on Bonds’ card. 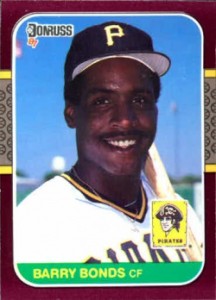 Ray was a fine player who had arguably played better than Bonds in’86, but he was part of the old guard in Pittsburgh and would be gone by season’s end. He also had his own card in the Opening Day set (#162).

To their credit, Donruss acted quickly to correct their gaffe, replacing Ray’s image on #163 with a beaming Barry.

Hey, He Looks Different! How Much You Want?

It didn’t take collectors long to notice the change in Bonds’ appearance, and the market for both the error and corrected cards began to heat up.

By the time summer was over, it was clear that the “Johnny Ray” version was much more scarce than the “white jersey” version (showing Bonds), and everyone started ripping open their factory sets to see if they had the prize error card. 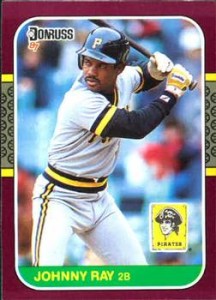 Most of us found the corrected Bonds card, though, and demand for the error card continued to climb. Over the next several years, it took on the same mythical status as hobby classics like “C. Nettles”, “All” Hrabosky, and “White Letters” Mantle.

It was estimated at the time that only about 2% of the Bonds cards actually showed Ray, and that number is nearly born out by the PSA population report, which pegs Ray between 3% and 4%.

Today, the corrected version sells for less than $10 in graded MINT condition, while the Ray error version brings several hundred dollars even raw.

Big Head? Heck, He’s Not Even the Same Person

Barry Bonds has taken a long, alternately glorious and bumpy, road since that Opening Day nearly 30 years ago. He transformed himself from a slender speedster with surprising power into a bulging mass of home-run-hitting muscle and set all sorts of records along the way.

Thanks to an abiding ego that swelled his head and an alleged dalliance with PEDs that was purported to have done the same, Bonds missed out on much of the adoration that might have been showered upon him had he taken a more humble approach to the game.

But the truth is that none of us should have been surprised by any of his machinations. Because, as the two 1987 Donruss Opening Day Barry Bonds baseball cards prove, he sometimes was just not himself. 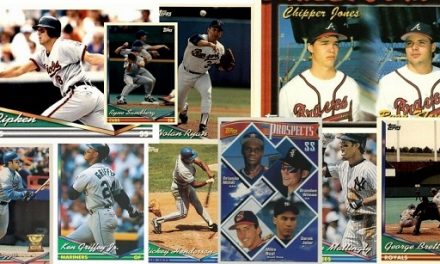 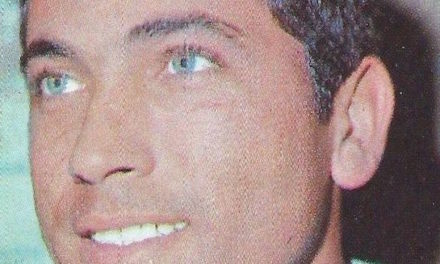 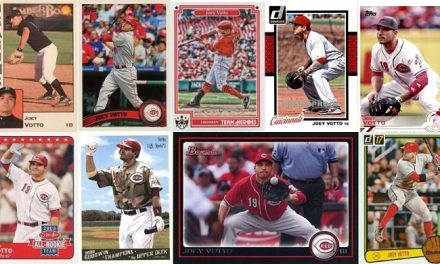