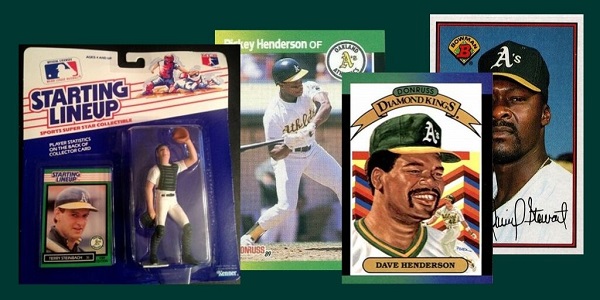 What comes to mind when you think of the 1989 World Series?

If you lived through that moment in baseball history, chances are that “earthquake” is one of the first words you think of when reaching back to that Bay Area series.

And, to be sure, the sport took a back seat to real life that October, as the good folks in San Francisco dealt with the aftermath of the monstrous earthquake that rocked the city minutes before the scheduled start of Game 3 (see below).

But there was also some baseball played that month, and, although the Fall Classic went the minimum four games, there were plenty of moments worth celebrating.

With that in mind, here is a game-by-game remembrance of the 1989 World Series, illustrated with one baseball card that captures the atmosphere and events of each contest.

Dave Stewart won 20 games for the third time in a row in 1989 (he’d tack on a fourth in 1990), but he faced tough competition in the Cy Young Award race from Kansas City’s Bret Saberhagen.

In fact, it seemed that all during Stewart’s run of dominance, there was always at least one guy each year who was just a bit more dominant.

Of course, you can’t control what the competition is doing, right?

What Smoke could control, though was how he pitched each night.

And, when Tony Phillips singled home Rickey Henderson in the bottom of the second inning in Game 1, you got the feeling the game was probably in the bag.

Your feeling was right, because, although Oakland tacked on four more runs, Stewart didn’t need a one of them.

The Oakland workhorse threw 138 pitches in going the distance, and he struck out six while allowing just five hits and issuing a single walk in the shutout.

Like the man himself, Stewart’s 1989 Bowman card is oversized and downright intimidating.

Things were a little tougher for the A’s in Game 2 … but not a whole lot.

Henderson again scored the game’s first run, this time on the back of a Carney Lansford double in the bottom of the first, and then then the Oakland bats went quiet for awhile.

The Giants tied things up in the thirrd when Robby Thompson drove in Brett Butler, but otherwise Mike Moore and Rick Reuschel looked like they were going to be stingy moundsmen.

In the bottom of the fourth, though, leadoff man Jose Canseco walked, and Dave Parker drove him home with a double.

A Dave Henderson walk and a Mark McGwire strikeout brought up catcher Terry Steinbach with two on and one out.

On a 2-0 pitch from Reuschel, Steinbach slammed the ball into the leftfield stands, and the A’s were up 5-1.

The bullpens took over in the fifth (Giants) and sixth (A’s) and locked it down from there.

As for Steinbach, he went back to his day job behind the plate, a gig represented well by his 1989 Starting Lineup figure and card.

Of course, Game 3 of this World Series is not remembered so much for what happened on the field as for the tragedy that delayed the contest a full week and a half.

With thousands of fans already in Candlestick Park for the 5:35 pm first pitch, the stadium began to rumble a little after five, and it didn’t take long before the locals figured out what was happening … earthquake!

The Loma Prieta quake didn’t last long, but it had devastating effects — dozens of deaths, thousands of injuries, billions of dollars in damage.

Suddenly, the World Series was an afterthought, and with the power gone and hunks of concrete falling from the upper deck, playing a game was pretty much an impossibility.

After ten trying days, though, and with the Bay Area still reeling, the A’s and Giants set up shop again in Candlestick.

And, for fans who needed to get their minds off the real world for awhile, this was just the ticket — a real slugfest!

The scoring started right off the bat (har!) and continued straight through the bottom of the ninth, when the Giants made a valiant comeback attempt with a four-run rally.

The two teams hit seven home runs between them, and tore through nine different pitchers. In the end, the Bash Brothers prevailed by a gaudy 13-7 score.

With that monster onslaught, how do you pick one guy as the face of the game?

So … I’m going with the dude who got it all started … Dave Henderson. One of the heroes of the 1986 ALCS for the Red Sox, Hendu double off Scott Garrelts in the first to drive in Carney Lansford and Canseco.

Henderson wasn’t a one-hit wonder, either, as he went 3-for-4 with a homer, four runs batted in, and two runs scored in the contest.

You better believe Henderson was a king of the diamond that night, just as he was on his 1989 Donruss Diamond Kings card.

With November staring them in the face, the A’s and Giants were back on the field for Game 4 the next day, October 28.

Oakland batters, in particular, seemed anxious to make sure they were home in time for Halloween, because the Bash Brothers and Others came out mashing.

It all started with Rickey Henderson, who led off the game with solo shot to left on Don Robinson‘s third pitch.

The A’s tacked on seven more runs through the top of the sixth, and it was pretty much all over … or maybe not quite.

Kevin Mitchell homered in the bottom of the frame off Moore, driving in Will Clark.

After Kelly Downs set down the A’s in order in the seventh, the Giants scored four more on a a two-run shot by Greg Litton (driving in Terry Kennedy), followed by a Candy Maldonado triple, a Brett Butler double, and a Robby Thompson single.

That damage ripped through the A’s bullpen, sending Gene Nelson and Rick Honeycutt to the showers before Todd Burns came in to get the third out (a Mitchell fly ball).

The A’s answered with a bit of small ball that included a single (Lansford), a walk (Canseco), a Mark McGwire foul popout, a Hendu walk, and, finally, a Terry Steinback walk to “drive” in the final run of the game.

From their, the bullpens settled into the fall air, with Burns, Steve Bedrosian, and A’s Hall of Fame closer Dennis Eckersley recording nine straight outs to seal the Oakland championship.

Game 4 was never really close, though the Giants gave it a run there in the middle. But the man at the top, Rickey Henderson, set the tone and set the stage for a sweeping A’s victory.

On that night and forever, Rickey belonged among Baseball’s Best, just like this Donruss card told us. 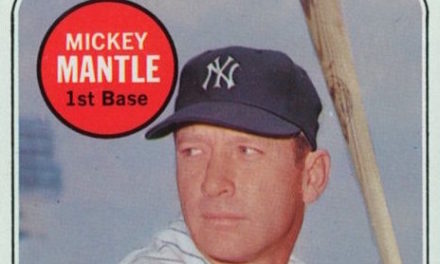 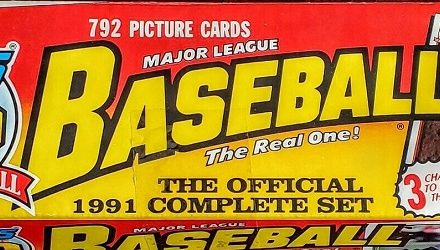 The Best Baseball Card from 1961 Is Shrouded in Mystery