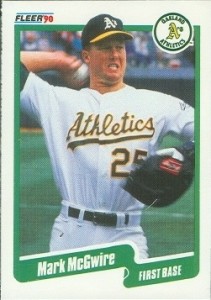 For fans of the old “Bash Brothers”, 1990 Fleer baseball cards just may be the ultimate tribute to a team that never quite lived up to lofty expectations.

Back in those days, Fleer employed a unique numbering scheme that placed the World Series champions at the top of the set, with players order 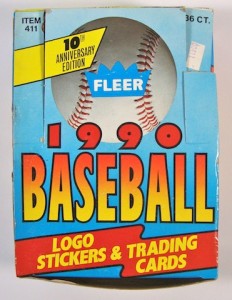 ed alphabetically. From there, teams were represented in order of their winning percentage from the year before, starting with the best and working down  the standings.

In the spring of 1990, the Oakland A’s were coming off a world championship in 1989, so Fleer dedicated card #1 to Lance Blankenship and rounds out their regular-player issues on #620 with Frank Williams of the Detroit Tigers, who had fallen on hard times 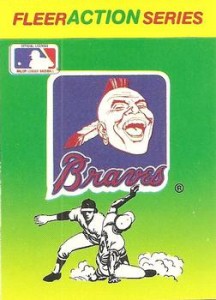 For the other 25 teams (at the time) and their fans, 1990 Fleer was just another in a long line of mass-produced sets that commemorated another year that ended without a ring and was long-ago shoved into a shoe box deep in the closet of our diamond memories.

That doesn’t mean it’s not worth another look more than a quarter of a century later, though, because its part of our collecting heritage, like it or not. 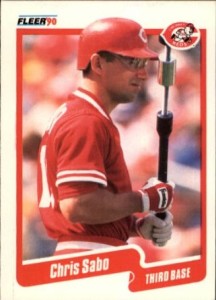 By the time the first wax packs hit store shelves in 1990, Fleer was reeling from events of the previous card-buying season and had to be a bit gun-shy about their new issue. After all, they were the only card company to ever lay out the “F” word, in clear focus and right-side-up, for the enjoyment of young fans.

Thank you, Billy Ripken and a flawed proofing/editing/butt-covering process.

So, while Topps was busy whipping up their Chiclet-inspired color explosion and Donruss was preparing to bleed through our wax packs, Fleer took a more conservative approach to their design.

Gone were the gray pin-striped borders and obscenities from 1989, replaced with blazing white margins and a focus on team branding. 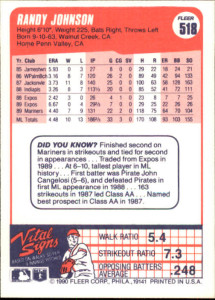 The player photo extends beyond the upper border — usually the top of a cap — and is set off by a team-colored pipe on the left, right, and top. The bottom features a folded, waving banner with the player’s name on the left and his position on the right.

Photo quality is not perfect but in general is much better than what Fleer offered in the 1980s, and the overall “mood” of the card front is that of a kids’ birthday party — all bright and ribbony and fluffy.

No swear words to be found. 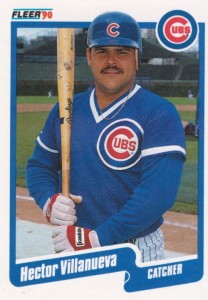 A red rectangle with rounded top corners and a banner-ish bottom border leads off each obverse and displays the player’s name and vital stats, capped off with the Fleer name and card number inside a baseball in the upper right-hand.

The middle two thirds of the card is devoted to a table of complete stats, including minor league numbers for most players. For younger guys, the stats box is followed by a “Did You Know?” block of more more detailed tidbits.

Did YOU know, for example, that the first batter Randy Johnson (6’10”) faced in the Major Leagues was John Cangelosi (5’6″ according to Fleer) of the Pittsburgh Pirates?

If there was anything that distinguished the Fleer baseball set from its competitors in 1990 it was the “Vital Signs” feature that finished off each card back.

There, in an early nod to sabermetrics, you can find three advanced stats for each player: OBP, SLG, and strikeout ratio for batters; walk ratio, strikeout ratio, and OBA for pitche 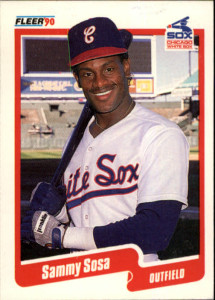 All in all, it’s a safe design that was likely intended to keep Fleer on the straight and narrow a year after their F-face debacle.

In an era when printing baseball cards was still thought to be akin to printing actual money, the denominations you were cranking out tended to be dictated by the rookie cards in your set. 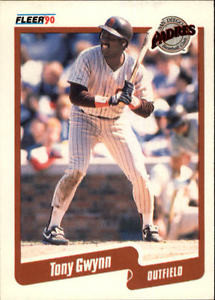 In 1990, Fleer — and the other manufacturers — had plenty of material to work with when it came to first-year bling.

And those are just the guys who still look good decades later, now that their full stories have been written.

At various points along the way, players like Mike Fetters, Eric Anthony, Alex Cole, Lenny Harris, Kent Mercker, Kevin Maas, and Derrick May provided hope for their teams and a bit of extra exposure for the 1990 set.

Of course, beyond just rookies, Fleer was able to include the biggest stars in the game among their 660 base cards. A few names you might recognize include Mark McGwire, Cal 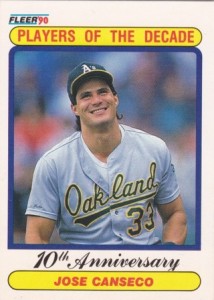 Ripken, Ken Griffey, Nolan Ryan, Roger Clemens, Tony Gwynn — you name him, and if he was a star in the early 1990s, Fleer had him.

Well, except for Frank Thomas. Fleer managed to miss out on the Big Hurt, but they had company on that front, as Donruss whiffed, too.

Otherwise, 1990 Fleer baseball cards had just about everything a collector could want, and more.

A Boxed Set in a Base Set!

Beyond it’s team-grouped player cards, roughly 24 per club, Fleer offered up a handful of subsets to build in variety for its 1990 set. Among these were:

Through the clever inclusion of these special features, Fleer was able to crank out three different Cal Ripken cards, two Jose Cansecos, and three Don Mattingly pasteboards, among other multiples. 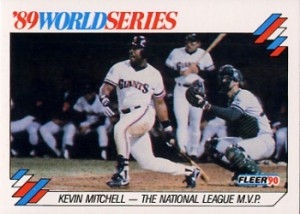 way to serve a star-hungry collecting public than to stuff your set with as many of the starriest players as possible?

Well, one way that Fleer and its competitors sought to draw us in was by including inserts in the various types of packs they used to distribute their cards. Among the options in 1990 were:

Included among the cards in these packs were three insert sets: 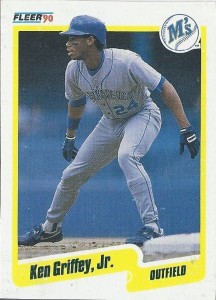 dition to all of these distribution methods, Fleer also offered a complete factory set, which included a 12-card set featuring highlights from the 1989 World Series.

Fleer tagged on another “set” of cards to its 1990 efforts, too, issuing 21 players and seven team logos as  wax-box-bottom cards in seven panels of four.

Finally, of course, the end of the season brought the 1990 Fleer Update set, which rectified their Frank Thomas lapse. Among the other 131 cards were rookie issues of Steve Avery and Jose Offerman (and others), and the first Fleer cards of stars like Dave Winfield and Cecil Fielder in new uniforms.

And, if all of those options don’t completely satisfy your 1990 Fleer cravings, you can rest easy knowing that there would still be some work to do in order to compile a complete master set of the Philadelphia company’s 10th baseball set.

In particular, there are several errors and variations among 1990 Fleer baseball cards, including: 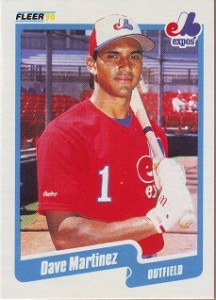 If you’re keeping score, that brings the total number of cards in the base set to 664, including variations.

It should be noted that the Martinez “yellow” variation appears to be extremely scarce and hardly ever comes up for sale. So, does that make it priceless or premium-less? Hard to say, but it’s probably somewhere in between.

What’s the Price of Infinity? 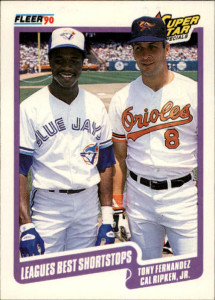 king of value, the 1990 Fleer set presents an interesting case. By the time it was issued, we were already getting the inkling that our yearly influx of cardboard was not exactly limited, and, as a consequence, this set never appreciated much in value.

Today, you can still find unopened 1990 Fleer product in just about every form and in quantities large enough to choke even the most prodigious landfill.

So, the question again is, does that make the set worthless?

Maybe not worthless, exactly, but certainly not priceless and maybe not even worthwhile for some collectors.

But there is something to be said for cards that you can buy in their original form nearly three decades after their issue for less than they cost when they first appeared on store shelves. At last check, you could pick up complete sets for well under $10 each on eBay, and full wax boxes would set you back around five bucks each 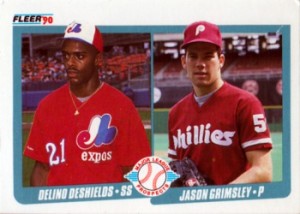 That’s less than 15 cents per pack, and it’s a heck of a bargain when you look into the going rate for time machines these days.

No amount of 1990 Fleer baseball cards will make you rich, but a pack or two just might make you happier for a few minutes and give you a shot of nostalgia like only the Wax Pack Gods can. 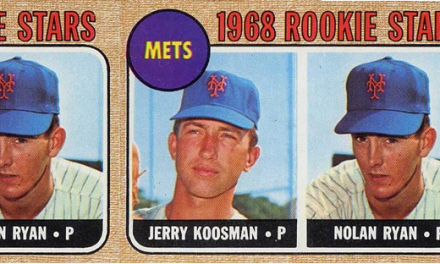 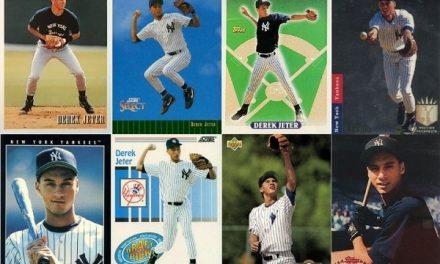 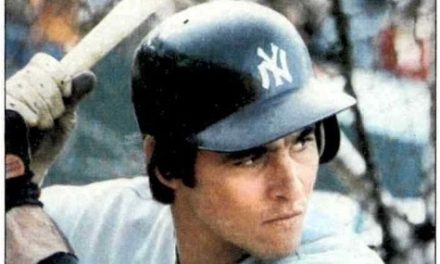