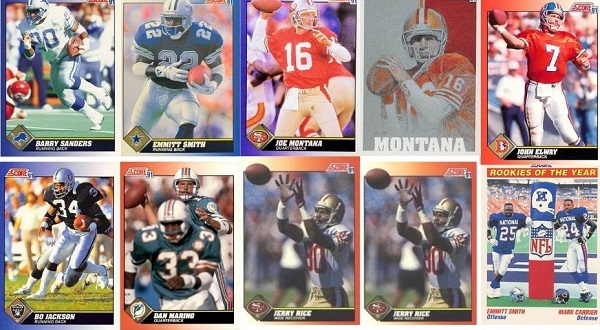 There was never anything very spectacular about 1991 Score football cards, but the set delivered on the promises the brand had built up over the previous three years — lots of cards, good photography, plenty of subsets, and a colorful but mostly subdued card design.

And, while the cards have also never been very valuable, there are still plenty of popular singles that continue to pluck at collector heartstrings after all these years.

Here, then, are the ten most popular 1991 Score football cards, ranked by the number of each that have been submitted to PSA for grading.

(Note: The sections below contain affiliate links to eBay and Amazon listings.)

It looks sort of strange to see Favre in a uniform other than the Green Bay Packers … or Minnesota Vikings … or New York Jets … or … well, OK, at the end of his career there, Favre could have shown up in just about any jersey.

But this one shows him as a young college buck, flashing that big arm for Southern Mississippi.

Or is that a Saints uni? Or Steelers?

Whatever the case, this is a Favre rookie card, albeit an overproduced one, and that makes it eternally popular with collectors.

Well, sort of, as it is the first base Score card to feature the NFL’s all-time leading rusher. But Smith had already graced a handful of cards, including a 1990 Score Supplemental, by the time this one found its way to the hobby.

Still, any early Emmitt showing him in his prime with the Dallas Cowboys is sure to have fans, and this one is no exception.

This card is both a first and a last for Montana — it’s the first card in the 1991 Score set (obviously), and it’s also the last regular Score card showing Joe Cool as a member of the San Francisco 49ers.

That’s because Score took a hard pass on him in 1992 after he missed 1991 with an injury, and by the time they were back on the Montana train in 1993, he was a member of the Kansas City Chiefs (that really happened).

So, this is sort of a historic hunk of cardboard, and, besides, Montana always appears near the top of these kinds of lists.

If you watched football in the 1990s, you probably remember this look from Marino — it was the look he flashed downfield right before he attempted to rip his receiver’s hands off with one of his patented bullet passes.

All that firepower led to monster stats that completely reshaped how we thought about what was possible for quarterback output and, though his numbers have been surpassed, Marino will always be part of our football heritage.

This card, too, even if it falls short of “iconic” or even “less plentiful than stars in the galaxy.”

When you find a third-year Barry Sanders card this far down on the list of popular pasteboards, you start to remember just how many all-time greats trod the gridiron during the early 1990s.

You can stack up a primetime Sanders against any of the greatest backs ever, and the Lions legend will come out on top nearly every single time.

Add in the mystique around what might have been had he not retired early (at 30), and you have a dude who will never lose his hobby appeal.

And the greatest receiver of all time mired down here in sixth place? Well, that’s a consequence of both all the other great players in this set and that Rice landed his rookie card way back in 1986. That means 1991 was the sixth season collectors were able to pull Rice from packs, and it seems even superbness can get to be old hat after awhile.

This is definitely a cheesy card, but it brings together both the offensive and defensive Rookies of the Year from 1990 together on one cardboard rectangle.

That’s akin to having Darryl Strawberry and Ron Kittle appear together on a card in the 1984 Donruss set. Wouldn’t that have been cool?

Yeah, it would have.

And, while Carrier is no Hall of Famer like Smith is, he turned in a star-level 11-year career that produced three Pro Bowl selections. No wonder this is still a popular card, huh?

By the time this card was issued, Elway had cemented his reputation as a big arm who couldn’t win the Big Game.

And then, when everyone had written off his Super Bowl pedigree, the man closed out his career with not one but two championships for the Broncos.

In an instant (well, in two seasons), Elway transformed his career and his cardboard from Hall-of-Fame level to stone-cold legendary.

OK, so I lied up there when Montana’s #1 card came up — this is the last base Score card to show Joe with the Niners.

This one is from the Team MVP subset, ironic given the turn of events that would leave Steve Young as the starter in San Francisco and Montana in K.C.

Still, a good-looking and affordable Montana card that collectors continue to enjoy.

Jackson would never again take the field in the NFL after this card was issued, thanks to the devastating hip injury he suffered during a playoff game in January 1991.

At the time, there was still some faint hope that Bo might make it back, and his popularity was hard for Score to resist … so they didn’t.

Lucky for us, because it means we can gaze on this hunk of farewell cardboard whenever we want to.